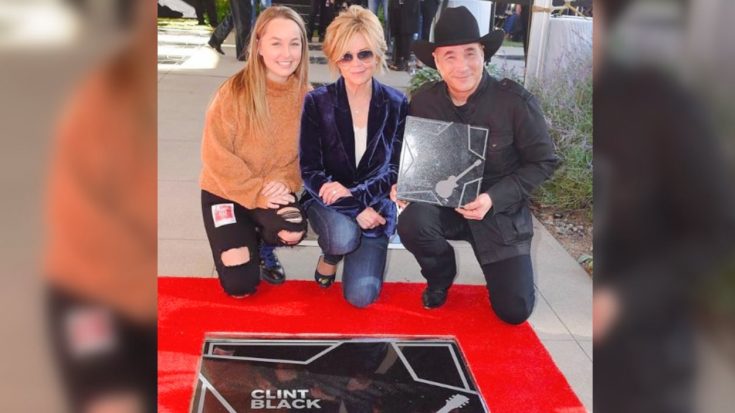 On October 22, five influential players in country music were granted a prestigious honor…they were inducted into the Music City Walk of Fame in Nashville.

Much like the Hollywood Walk of Fame in California, the Music City Walk of Fame honors its inductees with stars inscribed with their names. Now, those who visit Nashville can see five new stars that were just unveiled in honor of its recent batch of inductees.

Congrats to @ladyantebellum @clint_black and @macmcanally who all received their stars on the #MusicCityWalkOfFame yesterday! If you’re in #Nashville, make sure you stop by and see everybody’s stars!

For Clint, this induction means he now has a Walk of Fame star on two sides of the country. He was previously inducted into the Hollywood Walk of Fame in 1996.

Clint celebrated that past milestone prior to his Music City Walk of Fame induction by posting a throwback photo on Instagram.

Looking forward to tomorrow’s #MusicCityWalkofFame induction and looking back on this memory from my Hollywood Walk of Fame induction from 1996. #30YearsIn30Days #StillKillinTime

After Clint’s star was uncovered on the Music City Walk of Fame, he paused to take another celebratory picture. And this one included two of the most special people in his life, his wife and fellow singer Lisa Hartman Black, and their 18-year-old daughter, Lily.

In an October 2019 interview with Santa Ynez Valley News, Clint shared that Lily is currently studying business and music at Belmont University. Like her parents, Lily is also a singer, and Clint said, “She wants to go into the family business.”

Looking at the photo of Lily with her parents at Clint’s Music City Walk of Fame induction, we can’t help but wonder if she’ll one day have a star of her own!

It was such an honor to receive a star on the #MusicCityWalkofFame yesterday! What an incredible celebration with family and friends in @visitmusiccity. Congratulations to @ladyantebellum, @macmcanally, and the families of Chet Atkins and DeFord Bailey.

If you have never heard Lily sing before, be sure to check out the clip below. She joined Clint in 2018 for a Christmas duet, titled “Magical Christmas.” The song marked her musical debut, and what a debut it was!

Congratulations to Clint on his Music City Walk of Fame induction. We’re sure it meant the world to him to have his wife and daughter there to celebrate by his side.