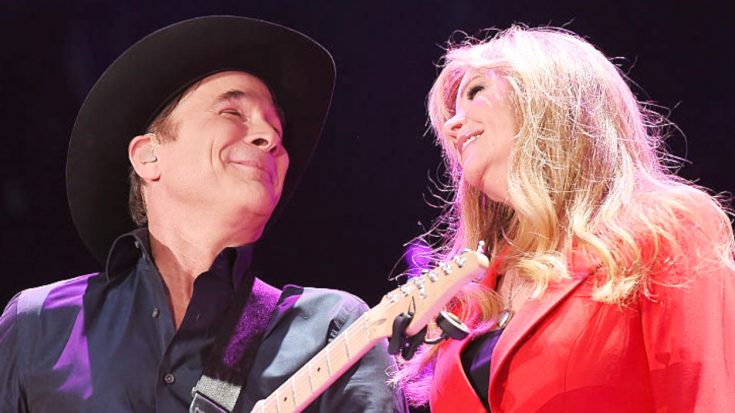 The Meeting That Started It All

Today, Clint Black and his wife, Lisa Hartman Black, make up one of the most beloved couples in country music history.

But if it hadn’t been for one little decision that Lisa made years ago, the two may have never met, and their love story never would have been.

Clint and Lisa were introduced after Lisa chose to attend his New Year’s Eve concert with her mother in 1990. Lisa, an actress and singer herself, was so impressed by Clint’s performance that she went backstage to meet him.

It was pretty much love at first sight, and the two were married the following year.

A Duet To Capture Their Love

Eight years after they became man and wife, Clint and Lisa proved the strength of their vows in the way that any famous country singing couple would…through song. Clint wrote a romantic declaration of love titled “When I Said I Do,” and had his beautiful wife join him as his duet partner.

The song instantly won the hearts of those who listened, and it soared to the top spot of the country chart. It was also a crossover success, peaking at the 31st spot on the all-genre Billboard Hot 100.

To this day, “When I Said I Do” is still regarded as one of the greatest love songs of all time. And it’s no wonder why. Clint and Lisa’s real-life love shines through in every word they sing, making it one of the most genuine love songs you will ever hear.

That love story isn’t just something that Clint captured in song. He lives it every day, and it shows in the way that he talks about Lisa.

During a songwriters’ event where Clint was performing in 2019, he couldn’t help but gush about Lisa and how long they have been married when someone asked how she was. “Yes, Lisa’s wonderful. Twenty-seven years of marriage!” he said.

From there, Clint dived into a short speech that everyone listened to with eager ears. In it, he said that over the years, he has been asked many, many times what the key to a happy marriage is. Finally, he believed he had figured it out, and wanted to share his secret with everyone else.

“But anyway, what [Lisa and I] do is, we identify along the way all the little things that irritate, annoy, frustrate, confuse, embarrass…” he said, as quoted by The Boot. “And then I just stop doing ’em. It’s really simple.“

Who would have thought that it was as easy as that?

Clint’s advice has to be good, since he and Lisa seem just as in love as they did decades ago. They perfectly captured those feelings in a newer duet titled “You Still Get to Me,” which they released in 2016.

While not as commercially successful as “When I Said I Do,” you can tell that “You Still Get to Me” has the same genuine quality that made its predecessor such a treasured track.

Go ahead and give “You Still Get to Me” a listen in the clip below. Clint and Lisa are just too sweet to handle!