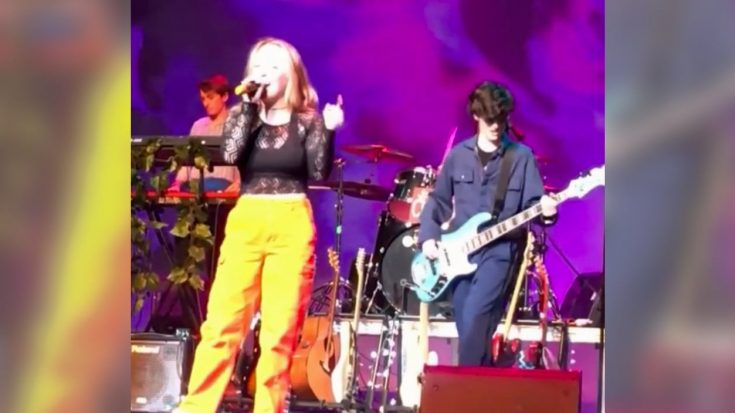 Clint Black and Lisa Hartman Black‘s daughter Lily Pearl had quite the eventful year in 2020. She made her Opry debut alongside her father in October, during which she sang a cover of Carrie Underwood‘s “Temporary Home.”

Then in December, Lily appeared on stage with her parents during their show at the Ryman Auditorium. These high profile performances placed Lily’s talent in the spotlight, and she quickly earned her own fans.

Although 2020 was a breakout year of sorts for Lily, she’s no stranger to performing. She has appeared on stage with her father before, and even recorded a Christmas song with him in 2018 called “Magical Christmas.”

Also a couple years ago, Lily delivered a standout performance of another Carrie Underwood song…”Cry Pretty.” Lisa recently shared a clip of this past performance on her Instagram, saying it was “One of [her] favorite clips of Lily.”

The video was filmed when Lily was a senior in high school. It shows her performing with a backing band as she belts out the lyrics of “Cry Pretty.”

If you’re familiar with “Cry Pretty,” then you know it isn’t an easy song to pull off. When it was first released, Carrie was praised for hitting notes she had never hit before, and for pouring a wealth of power into her performance.

Anyone who dares to cover “Cry Pretty” has a lot to live up to. But Lily met the challenge, and proved she is more than capable of holding her own in the music industry.

The clip Lisa shared of Lily covering “Cry Pretty” is short, but it’s long enough to give you a grasp of just how talented she is. Check it out below.

With a voice like hers, Lily appears to have a bright future ahead of her. We wish her the best!