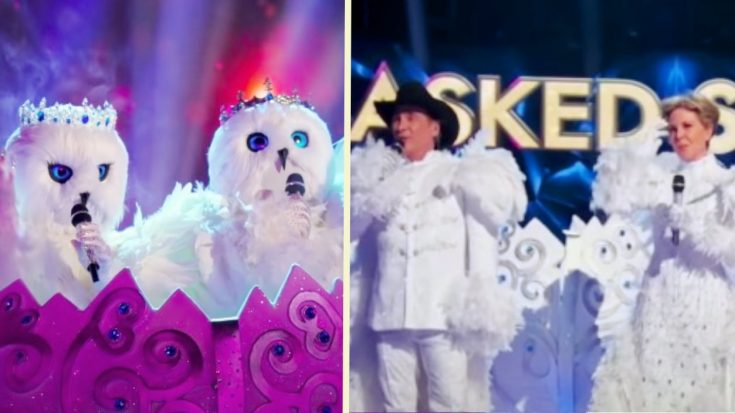 For the first time ever, Season 3 of The Masked Singer featured a duo. They performed as the Snow Owls, and  they amazed the judges and viewers with their performances.

They sang everything from “Because You Love Me” by Celine Dion to “Like I’m Gonna Lose You” by Meghan Trainor.

Never once did the Snow Owls perform a country song during their time on the show. If they had, they may have easily given their identities away. Why? Because both snow owls are actually country singers in real life!

Still, judge Nicole Scherzinger felt pretty confident she recognized the voice of the male Snow Owl. She placed her bets on him being Clint Black, known for his songs “A Better Man” and “Killin’ Time.”

As for the female Snow Owl, it only made sense to Nicole that she would be Clint’s wife, actress and singer Lisa Hartman Black. She and Clint share a #1 duet, the country love song “When I Said I Do.”

The Snow Owls were finally unmasked during an episode that aired on November 11. And it turns out Nicole’s guesses were correct!

That was fun! WHO guessed it? A lot of you did, that’s WHO! Lisa Hartman Black and I had quite the time as the Snow Owls on @MaskedSingerFOX this season! ❄️ pic.twitter.com/pTYXS47rh5

When host Nick Cannon asked Nicole how she was able to correctly guess the Snow Pwls’ identities, she said, “…honestly, it was Clint’s voice.”

Now looking back on the Snow Owls’ performances, we’re kicking ourselves for not recognizing Clint’s voice sooner! He has an unmistakable sound and Nicole was able to pick up on that.

Watch the exciting moment that Clint and Lisa were unveiled as the Snow Owls on The Masked Singer by checking out the video below. They did such a good job on the show!