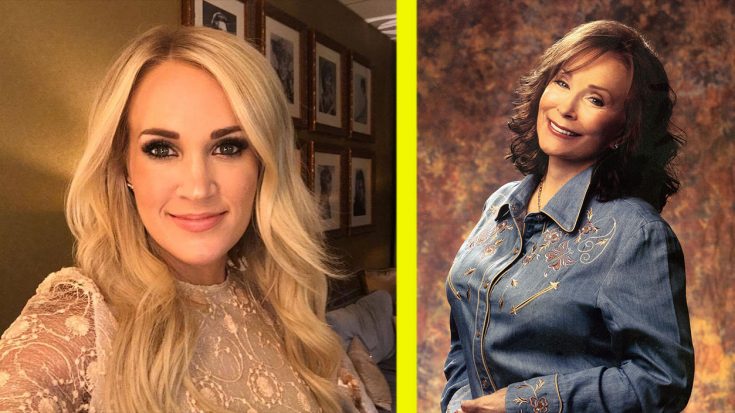 Carrie Underwood has graced the stage of the Grand Ole Opry countless times. In a recent interview with People, Underwood recalls different experiences and memories at country music’s most iconic venue. Perhaps the most shocking is the almost unbelievable story of how she met Loretta Lynn for the first time.

When the superstar got asked what her most memorable backstage encounter with another Opry star was, she replied:

“I was talking to Vince Gill, and somebody walked by me and smacked my rear. It definitely caught me off-guard for a second, and then I turned around, and that was my first time meeting Ms. Loretta Lynn!”

Underwood shared the story during a retrospective People published about the Opry turning 95 in October of 2020.

Soooo grateful for my fans who come from near and far to be at the Fan Club party year after year!! You guys are the best! I hope you all had as much fun as I did today! #Carebears

She also talked about her favorite Opry debut memory:

“It was such a whirlwind because it was right after I was on American Idol. I was backstage, and there were so many people I was meeting and taking pictures with. I just felt like everyone was excited I was there, which was great because I was excited that I was there!”

Underwood was inducted into the Grand Ole Opry as a full member on May 10, 2008. Fellow Oklahoman Garth Brooks had the honor of welcoming her into the country music institution, and she continues to perform there regularly. Watch her induction in the video below.