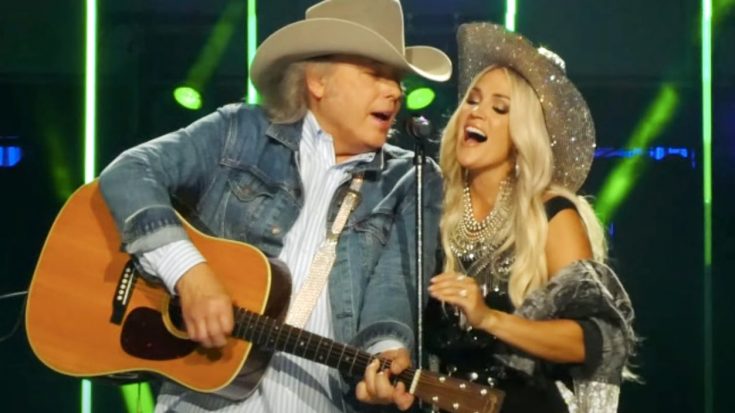 Carrie Underwood got the chance to participate in a dream-come-true collaboration during the first night of the 2021 CMA Summer Jam. Just hours after her performance on July 27, Underwood took to social media to gush about the experience.

Her collaborator was the one and only Dwight Yoakam, a country music icon known for his unique style. He served as the voice behind several major country hits in the 1980s and 1990s, such as “Streets of Bakersfield,” “Fast as You,” and “Guitars, Cadillacs.”

Another one of Yokam’s big hits was 1993’s “A Thousand Miles from Nowhere.” The song, which was written entirely by Yoakam, reached the second spot on the U.S. Hot Country Songs chart following its release.

It was “A Thousand Miles from Nowhere” that Underwood sang with Yoakam during the 2021 CMA Summer Jam. The crowd gathered for the event at the Ascend Ampitheater in Nashville was certainly surprised to see Underwood and Yoakam on stage together!

“Never in a million years would I have thought I would get to share the stage with someone this cool! @DwightYoakam you are a LEGEND and, now, a friend as well! Thank you!” Underwood wrote on social media alongside a photo taken during her and Yoakam’s performance.

Never in a million years would I have thought I would get to share the stage with someone this cool! @DwightYoakam you are a LEGEND and, now, a friend as well! Thank you! #CMASummerJam Guitars…Cadillacs…And Cowboy Hats 📸: @JeffJohnsonFilm pic.twitter.com/1T9kYc3tQl

Highlights from CMA Sumer Jam later aired during a September 2 special on ABC. Underwood and Yoakam’s duet was featured during the broadcast.

You can watch the two country superstars sing “A Thousand Miles from Nowhere” together by tuning in to the video below. They make a good team.

The people in the audience got the chance to witness a once-in-a-lifetime performance that night!