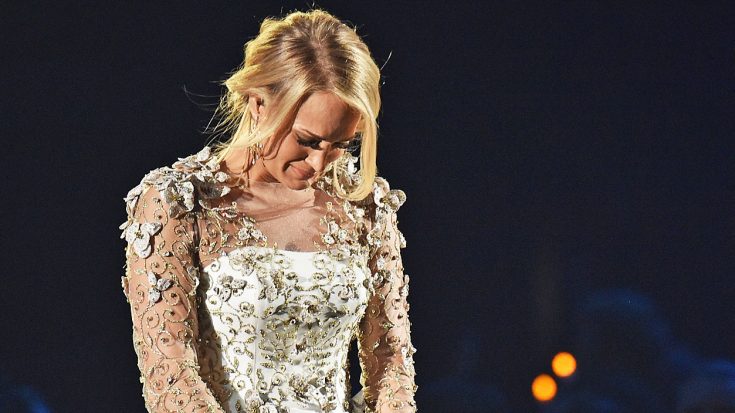 For the tenth time, Carrie Underwood and Brad Paisley served as the hosts of the CMA Awards in 2017. The duo was known for their skits and parody songs that they sang in their opening monologue.

Underwood and Paisley delivered yet another ditty during their opening bit at the 2017 show. But that wasn’t the only performance that Underwood took part in.

Leading up to the ceremony, Underwood was announced as one of the scheduled performers. No one knew what to expect from her or her performance, since she had been off the touring scene all year and hadn’t released a new single since her duet with Keith Urban on “The Fighter.”

In an interview a few days before the awards aired, Paisley shared that he felt Underwood’s performance would be a highlight of the show.

No one knew what that meant until the awards aired, when it was revealed that Underwood would be singing a memorial performance.

After much anticipation, we finally got to see what Underwood had in store once she took to the stage for her performance at the 2017 CMA Awards.

Wearing a magnificent white gown, Underwood’s voice rang throughout Bridgestone Arena as she sang the opening lines of the beloved hymn, “Softly and Tenderly.”

Not sure there will ever be a more powerful performance on the #CMAs. Just felt Jesus in our living room. Amazing job @carrieunderwood

During the performance, images of artists, musicians, and musical figures that have passed away in the past year flashed on a screen behind Underwood.

Beautiful way to remember all those we lost this year. #CMAawards pic.twitter.com/gFbQCBqK3i

In the middle of the performance, a few clips played of artists who have since passed on. These clips came from former CMA Awards ceremonies, and featured Don Williams, Glen Campbell, and Troy Gentry.

At the end of the performance, Underwood found herself struggling to sing as images of the Route 91 shooting victims appeared on the screen. There wasn’t a dry eye in the room at that moment…

Rest in peace to the beautiful people we lost in Las Vegas…#CMAawards pic.twitter.com/pXahzNM8Q7

Be warned, you’ll want to grab some tissues before you watch this…

WOW!!! Was able to finally catch up this weekend on the CMA Awards from last week. My favorite performance of the night was Carrie Underwood. Not only is "Softly & Tenderly" one of my favorites hymns but Carrie was unbelievable combined with the faces of Vegas had tears in my eyes. Did you see this performance?