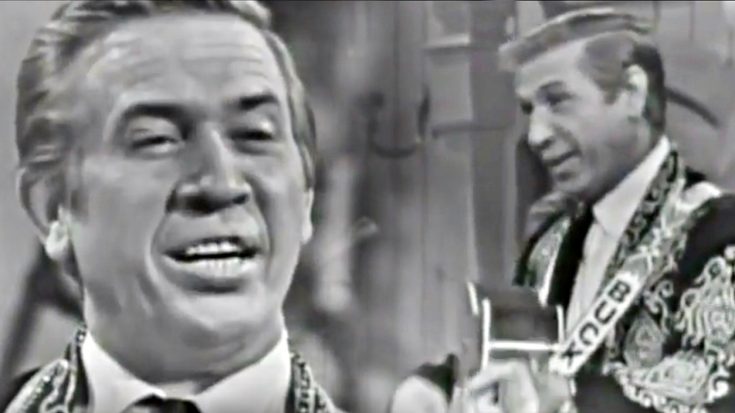 The pioneer of the Bakersfield sound gave country music a lot to talk about when he was a young chap. In this rare recording of him singing “Santa Looked A Lot Like Daddy,” you can see exactly why!

As Buck Owens stood in front of the crowd with a big smile on his face, he was wearing a classic bedazzled Nudie suit of the times. His guitar was hung across his chest with a guitar strap with “BUCK” written in big letters. Just one look at him, and you’ll be brought back to simpler days.

While the host is introducing Buck, you can feel his excitement come across the stage. Knowing he was in the midst of a legend, he almost runs out of breath asking the crowd, “Would you believe it? This nut here had the number two – of all the artists in the country – he had the number two Christmas record!”

Buck owens all i want for #christmas dear is #you/santa #looked a lot like dad 45, LINK:http://t.co/Qzo6nUcQnx pic.twitter.com/dZgWd5eXTq

Obviously, Buck had to play something off his hit record – and he knew just what to sing. “Santa Looked A Lot Like Daddy” was on the B-side of the record and most Buck Owens fans can sing it word for word.

The story follows a young boy who sneaks downstairs only to catch a glimpse of his father in a Santa costume. Buck sings the upbeat tune with the smile we all fell in love with back in the 1960s.

You can watch his blast-from-the-past performance below. We’re sure you’ll have it on repeat as the holidays get closer and closer!