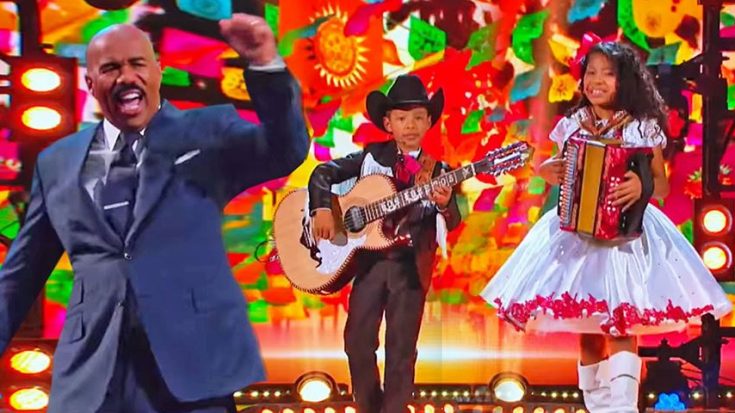 Steve Harvey, the host of Little Big Shots, has the privilege of witnessing some of the greatest little acts in show biz. But no matter how many astonishing displays of talent he sees, he never ceases to be amazed.

Brother and sister act Yaxeni and Ricardo Rivera, 11 and 9 years old, come by their musical abilities naturally. As a boy, their father, Ricardo Rivera, sang at various venues in his native San Luis Potosi, Mexico to help support his family. It came as no surprise then that his children began playing musical instruments at the early ages of four (Ricardo) and six (Yaxeni.)

What did surprise the young entertainers’ parents was the fact their children were singing in English before they perfected speaking the language.

Despite their young age, this talented team has already recorded two albums. With the help of their parents, the Rivera children perform numerous musical presentations, but, of course, top priority is given to school.

Self-described as a norteño duo, the Houston siblings play small-group dance music. The standard norteña ensemble features an accordion and a baritone-range twelve-string guitar. That’s exactly what you get in this presentation of Buck Owens‘ 1966 number one hit, “Open Up Your Heart.”

Steve Harvey stood to the side by the stage curtains tapping his foot to the melodic beat, shaking his head in disbelief at the extraordinary abilities of these aspiring showmen. It was obvious this wasn’t the children’s first appearance on stage. They mastered the steps, the music, and took control of the audience. Harvey appeared in awe, joining in the thunderous roar of the approving crowd.

Once you watch these kids perform, you’ll understand why the audience reacted the way they did. No doubt these little kids with a big heart will become the stars they hope to be. We’ll be seeing them again and again.

What do you think of the “Little Big Shots” performance?