Brooks & Dunn Joins Forces With Luke Combs On “1, 2 Many” 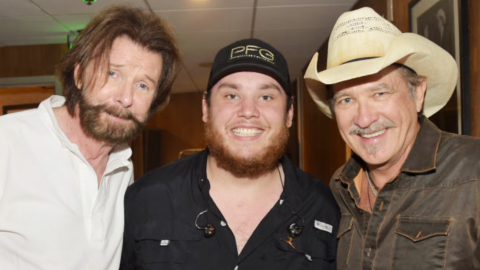 In early 2019, Brooks & Dunn released their first new album since announcing they retired as a duo in 2010. That album, called Reboot, did not feature original material as fans hoped, but instead, sported updated recordings of some of Kix and Ronnie‘s biggest hits.

Those updated recordings featured vocal contributions from some of country music’s hottest stars, including Midland, Kane Brown, and Kacey Musgraves.

Another artist who made a contribution to the record was country music powerhouse Luke Combs. Combs has been singing Brooks & Dunn’s “Brand New Man” in his live shows for years, so it only made sense to have him join the duo on the updated recording of the song.

Combs’ rendition of “Brand New Man” was one of the first tracks released off of Reboot, and also one of the most successful. It hit the 30th spot on the Hot Country Songs chart and was nominated for a CMA Award.

After the success of that collaboration, Combs turned the tables and asked Brooks & Dunn to help him out with a song of his.

On September 10, 2019, Combs took to Facebook with a message for his fans. If that post got 50,000 likes, he would release a new song called “1, 2 Many” off of his then-upcoming record What You See Is What You Get.

Luke played the song during past shows, but had never released a recorded version of it.

The post ended up getting enough likes, and Combs debuted “1, 2 Many” on September 12. And much to everyone’s surprise, they discovered the track is yet another collaboration with Brooks & Dunn!

Ever since Combs started singing “1, 2 Many” live, he made it clear the track was inspired by Brooks & Dunn and other 90s country icons. During a show in Colorado in May 2019, he even said, “This is my Nineties country drinking song.”

He evokes that same message in the official music video for “1, 2 Many,” saying when he wrote the song, he hoped his 90 country idols would be happy with it. Clearly at least the fellas in Brooks & Dunn were impressed, because they joined him on the track!

Kix and Ronnie jump in to sing along with Combs at the end of the song, so make sure you watch the below music video all the way through.