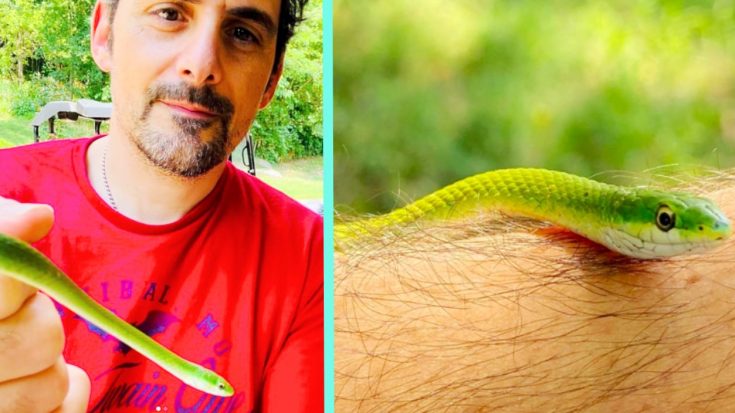 Brad Paisley had a wild encounter while out and about on Monday (August 10).

The “No I in Beer” singer came across a gorgeous green snake and had to snap a couple of pictures to show off his new friend. Don’t panic…green snakes are non-venomous.

Since the green snake Brad encountered wasn’t venomous, he picked up the slithery creature and posed for a couple of photos. His wife, Kimberly, shared the pictures on her Instagram.

The snake Brad found was quite the beauty, and was a stunning shade of bright green. It appeared to be just as bright as the leaves on the trees behind Brad.

Picture number one in Kimberly’s slideshow depicts Brad holding his new snake friend while grinning at the camera. The second picture is a closeup of the snake resting comfortably on Brad’s arm.

Kimberly described their encounter, writing, “Catch (and release) of the day! An aptly named Green Snake that moves like grass in the breeze.”

She then shared a “FUN FACT” with her followers, which explains why her photos of Brad and the snake were zoomed in so close. It turns out Brad wasn’t wearing any pants at the time!

“@bradpaisley caught this whilst wearing no pants (but he wouldn’t let me show you that part),” Kimberly said, including the hashtag “#nopantsmonday” in her post.

Catch (and release) of the day! An aptly named Green Snake that moves like grass in the breeze. Also FUN FACT: @bradpaisley caught this whilst wearing no pants (but he wouldn’t let me show you that part). #science #nopantsmonday #snakes

A post shared by Kimberly Williams-Paisley (@kimberlywilliamspaisley) on Aug 10, 2020 at 12:21pm PDT

That fun fact of Kimberly’s left several fans with more questions than answers. They had some pretty comical responses to Kimberly’s post:

“He was outside with no pants?” commented joyvw1.

“You didn’t show your no pants snake catchin’, but the paparazzi will!” said 1labellavitaforme.

We have to agree with the comments, the idea of Brad catching a snake while wearing no pants is a funny one to think about.

Watch Brad and Kimberly get up to more comedic shenanigans in the below clip from Brad’s 2019 comedy special. We can always count on the two of them for a good laugh!