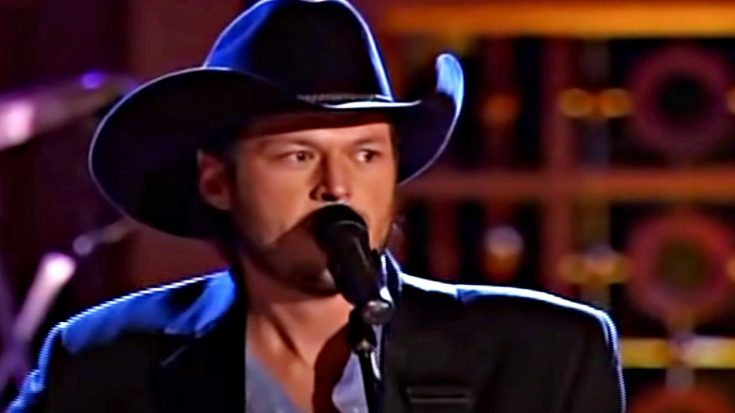 Clad in a black cowboy hat, Blake Shelton took the stage at the Cracker Barrel Country Songs of the Year Concert in 2006.

He and many other country singers including Trisha Yearwood, Josh Turner, Hank Williams Jr., and Trace Adkins all performed at this concert paying tribute to country music artists who paved the way for them.

Merle Haggard, George Jones, John Denver, Vince Gill, Kenny Rogers and many more were honored at the once in a lifetime concert.

Rogers, who had been in the music industry for over 60 years before he passed in 2020, had charted over 120 singles across various music genres, but one song that stands out above all the rest is his #1 song, “The Gambler.”

What is now considered Rogers’ signature song, “The Gambler” hit number one in 1979 and won Rogers a Grammy for best male country performance in 1980.

Shelton put his own spin to it at the Cracker Barrel concert, and we must say, we love it! The audience felt the same way because when the cameras pan to them, every single person is singing along and bobbing their head!