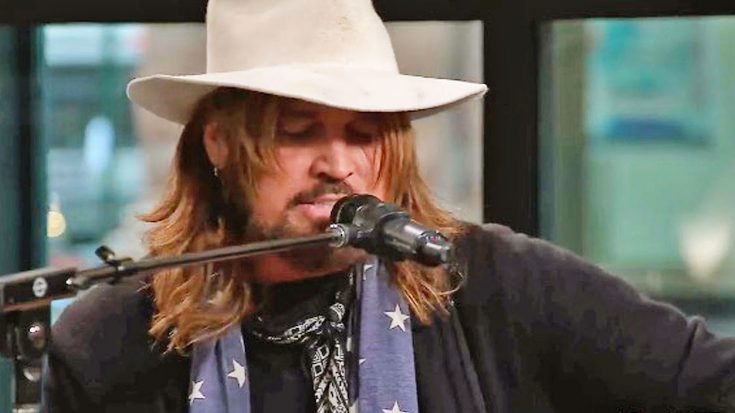 Sometimes a country song sounds best when it’s simply a singer and his or her guitar. No band, no flashing lights, no glittery costumes. Just a raw, honest performance that comes straight from the heart.

Such performances get even better when the song being performed is a country standard. So you can imagine how good it must have been when Billy Ray Cyrus sat down to deliver an unplugged performance of one of Johnny Cash‘s biggest hits.

While appearing on the BUILD Series in New York City, Cyrus decided to build on country tradition by performing Cash’s “Folsom Prison Blues.” Written by Cash and released in 1955, “Folsom Prison Blues” topped the Hot Country Songs chart and made it to the 32nd spot on the Billboard Hot 100.

Today, “Folsom Prison Blues” is one of the first songs that people name when they are asked to name their favorite song of Cash’s. As you could guess, it is also a favorite of “outlaw” singers, and has been covered by a number of them. A few such singers include Waylon Jennings and Merle Haggard.

But the song’s legacy is so powerful that it made an impact on artists who fall outside of the “outlaw” label as well. Some of these singers include Scotty McCreery, George Strait, and of course, Cyrus.

Following his appearance on the BUILD Series, Cyrus shared the clip of his cover of “Folsom Prison Blues.” He didn’t sing the whole song, but still managed to give everyone a nice feel for it with his performance.

Cyrus’ cover definitely took on a raw, gritty tone, which seems fitting considering the song’s story and theme. Nothing about his performance was over-the-top, and that no-nonsense approach fit the song perfectly.

Now you can watch how Cyrus handles “Folsom Prison Blues” by tuning in to the clip below. We love it when the classics keep coming back like this!