Bill Anderson Mourns The Loss Of Woman Who Was His ‘Everything’ 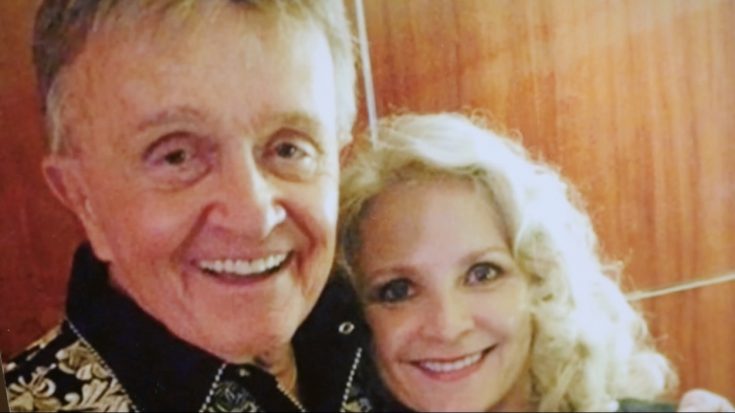 Decades after meeting her for the first time, Whisperin’ Bill Anderson found companionship with a woman named Vickie Sallis.

They first met when she was 19 years old, and she was actually married to his guitar player. After they got a divorce, she remarried and lived on the East Coast with her husband for seventeen years. When that marriage eventually ended, she moved back to Tennessee to be near her sons.

Vickie and Bill didn’t keep in touch this entire time, but on her first morning in Tennessee, he was on the front page of the newspaper, which prompted her to call him to check in on her old friend. Unbeknownst to her, Bill’s marriage to his wife Becky had ended many years prior. The two friends met up and for the next 12 years, they were pretty much inseparable.

“We never married, we never lived together, but she became my everything from that moment forward,” he wrote in a lengthy Facebook post on Wednesday (Jan 16). The legendary singer-songwriter revealed in the same post that his “sweet Vickie…went home to Heaven today…years before it should have been her time to go.”

Vickie was diagnosed with cancer in 2016 and had tumors in her liver and lungs. Bill wrote that Vickie lost her hard-fought battle against cancer “between one and three a.m. this morning…and [took] her first breath in Heaven shortly thereafter.”

“The first thing I’m going to do when I get to Heaven is ask Him to explain this one to me. Because right now, I just don’t understand,” he wrote on Facebook.

When she was first diagnosed, Bill wrote a song called “Until The Light Comes On Again,” and he shared the video with the world for the first time today.

“I’ve always expressed myself the best when I’ve set my thoughts to music,” he said in the video before singing the song he wrote for his “sweet Vickie.”

“You can draw your strength from me / The way I’ve always drawn my strength from you / I’m here with you right beside you / Let me hold you to your hand / Let me lead you through the darkness / Until the light comes on again, ” he sings.

Watch him say a few words about his “sweet Vickie,” followed by a performance of “Until The Light Comes On Again” for her in the video below.

Our prayers are with Bill, her sons, and their families as they mourn this devastating loss.

Until The Light Comes On Again

I wish each one of you who is reading this could have known my sweet Vickie.She was the kindest, gentlest, classiest, most compassionate, giving and loving person I have ever known.Sadly, she left us and went home to Heaven today…years before it should have been her time to go.I met her when she was only 19-years old and married to the guitar player in my band. They divorced, she moved back to her home state of Michigan, and then to Washington, D.C., where she married again and lived for seventeen years. We didn't stay in touch, but when that marriage collapsed, she moved back to Tennessee to be near her two sons. The day she got to town, my picture was on the front page of our local morning newspaper.She saw it, and it prompted her to call me and ask how my former wife, Becky, and I were doing. She did not know that we, too, had gone our separate ways ten years earlier.We talked a long while, made arrangements to get together at a nearby Mexican restaurant, and that was almost twelve very short and very wonderful years ago. We never married, we never lived together, but she became my everything from that moment forward.When she was first diagnosed with cancer in 2016, it rocked both our worlds. Neither of us could believe it. I wrote a song for her, telling her that I would walk with her through the darkness, "Until The Light Comes On Again." And the light did come on again for a while. She went through chemotherapy and radiation and was able to go back to work (she was the head tailor at the finest men's store in Nashville), and we thought the worst was behind us. Unfortunately, cancer had other ideas.It reappeared in the form of tumors on her liver and her lung. More chemo…experimental drugs…holistic procedures…we tried anything and everything to try and keep it at bay. On New Year's Eve, when I took her to the hospital for what was supposed to have been another routine treatment, the doctor said she was too weak to withstand any more side effects from the powerful drugs they had been giving her. They ruled out surgery. Four days later Hospice was called in.She took her last breath on this earth sometime between one and three a.m. this morning…and her first breath in Heaven shortly thereafter. It wasn't supposed to be this way. She was 15-years younger than me. The roles were supposed to have been reversed. She was supposed to be sitting at the side of MY bed feeding ME soup and ice cream, not the other way around. I have a lot of faith and I believe God's hand is in everything that happens in this old world, BUT….The first thing I'm going to do when I get to Heaven is ask Him to explain this one to me. Because right now, I just don't understand.Rest In Peace my sweet, wonderful, beautiful, and oh so special lady. I will miss you forever.Bill