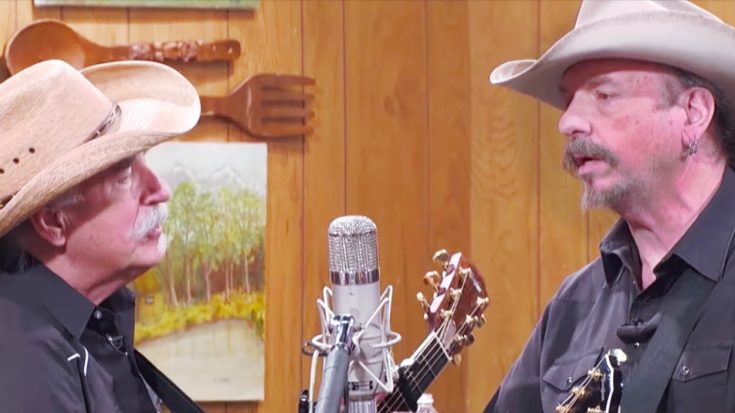 The Bellamy Brothers made their name in the music industry in the 70s and 80s with songs like “If I Said You Had A Beautiful Body Would You Hold It Against Me.” Now, the brothers are at it again. With just two guitars and their voices –  they gave hands-down one of their best intimate performances of the 1976 hit song, “Let Your Love Flow.”

David and Howard Bellamy have been rocking out since they were just little kids in Florida. Inspired by their father who played in a Western swing band, they taught themselves how to play several instruments and created their own brother-duo band.

The Bellamy Brothers’ song “Let Your Love Flow” was recorded in 1975 and reached international status as a major hit by 1976. Written by Neil Diamond’s roadie – it was rejected by the folk-rock star and fell into the laps of the brothers. The song Diamond threw away put the brothers on the map and kick-started a life-long career they are still enjoying today.

After the success of “Let Your Love Flow,” the brothers went on to write and record many other country music favorites. Still, they humbly remember their beginnings and will give the rare performance of their first hit song upon fans’ request. In their recording with Country Road TV, they gave the audience a very special treat by singing the classic in a very intimate setting.

Surrounded by a small group of fans sitting in a diner – Howard opens his mouth and before he can even finish the first line, the crowd starts hooting and hollering when he sings, “There’s a reason…”

The brothers continue singing and take us all the way back to the 1970s as they chant, “Just let your love flow/ Like a mountain stream/ And let your love grow/ With the smallest of dreams.”

Check out the full video below to see the duo perform the timeless song that once went international. Their ability to still play it so flawlessly will blow you away!

No matter how many times you’ve heard this song before, The Bellamy Brothers’ hit will get you up on your feet and grooving along.