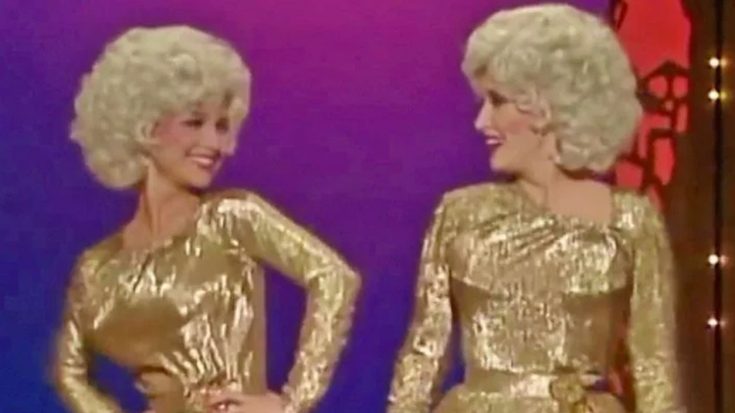 We know that Barbara Mandrell is an incredible singer and musician, but did y’all know she is an amazing impressionist as well? Mandrell and her sisters Louise and Irlene had one of the most popular variety shows in the early 1980s.

Each week, country music’s biggest stars would join them and an up and coming country singer for a talent-filled episode. Some guest stars have included Larry Gatlin, Charley Pride, Marty Robbins, Alabama, Ricky Skaggs, and Dolly Parton.

In the episode featuring Parton, Mandrell decided to have some fun with her, since Parton always has such a good attitude and often enjoys pranking people herself, like this time she snuck up on Randy Travis during a live awards show!

A busty blonde woman walked out on stage, and until there was a close up of her face, everyone thought it was Dolly Parton! Nope, it was Barbara Mandrell dressed like Dolly Parton. In fact, she was wearing the exact same outfit Parton was wearing.

“I just can’t tell you how proud I am that Barbara asked me to be on this show,” Mandrell said, acting like Parton. “I mean, to me, Barbara Mandrell is one of the giant talents of our business. She’s electric and exciting and of course, so beautiful!”

Mandrell let out a high pitched giggle, quite like the one we’ve grown to know and love from Parton. As she continued raving about herself, impersonating Parton, someone began walking out from backstage wearing the same hairdo and dress as Mandrell. It was Dolly Parton!

When Mandrell said, “Everything I know about music, I know from Barbara Mandrell,” Parton interjected, with her hands on her hips, and said, “Oh, do tell!”

Questioning Mandrell’s attempt at being busty like herself, Parton jokingly asks her, “What do you got in there, your sisters?!”

They got the whole crowd laughing, and even more at home! “We’ll be right back with more,” Mandrell says.

“Some people, you’ll be right back with less!” Parton replied. Watch the hilariously adorable moment below!