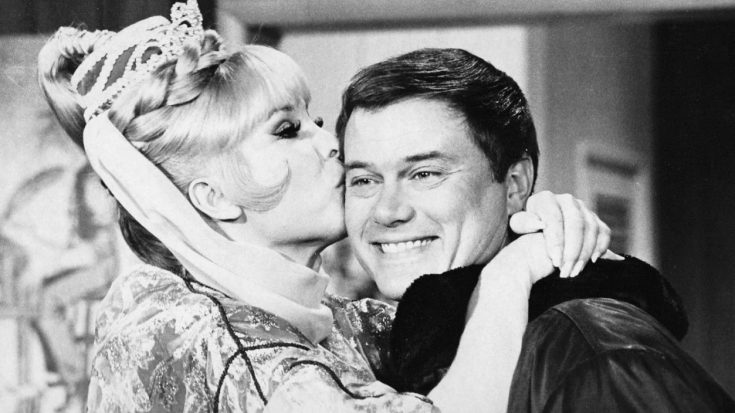 The TV series I Dream of Jeannie ran from 1965 to 1970 starring Barbara Eden as a 2,000-year-old genie named Jeannie, and Larry Hagman as an astronaut named Tony Nelson who becomes her master.

Happy Anniversary to "I Dream of Jeannie!" September 18th 1965 Captain Nelson discovered her and five years of silly…

After the show was canceled, the show’s producers had to figure out what to do with the set and props used for the show. During the ’50s and ’60s in Hollywood, it was quite expensive to store collective sets and props, and it was not worth spending the money if it won’t serve any purpose anymore. To resolve this, the crew sadly burned down Jeannie and Major Nelson’s “home” in order to avoid a big expense with no payback.

Barbara wearing the reunion costume from 'I Dream of Jeannie: 15 Years Later' 1985.

One of the props was saved from the fire by Eden herself. Before everything was destroyed, she managed to get a hold of one of the series’ magic lamps. Made from a Jim Beam decanter, it was hand-painted by the show’s prop department. For the 139 episodes of I Dream of Jeannie that aired, it is estimated that about 12 of these decanters were used. Some were used as stunt bottles to make the smoke effect that accompanied Jeannie’s exit from the bottle. The smoke was made in the bottles using heat and chemicals that would sometimes cause the bottle to break.

One of many fun photographs coming to new albums at Barbara's Official Website. Including photos from her trip to…

For years and years, Eden kept the bottle locked up in a private safe in a bank vault. Eventually, she decided to donate it to the Smithsonian Museum in Washington DC, where it is one of the most famous and visited TV props in history.

Watch the video below for more behind the scenes info about the show.