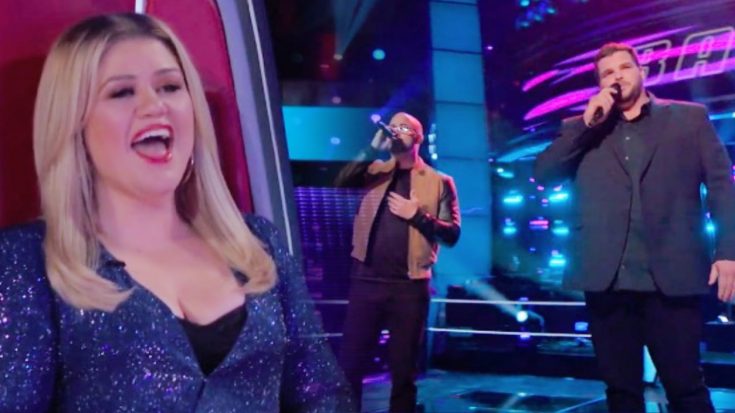 “Always on My Mind” is the textbook definition of a timeless song. It has been around since 1970, and has since been recorded by a number of iconic artists, including Elvis Presley and Willie Nelson.

Presley’s 1972 rendition of the song landed in the Top 20. Nelson released his version ten years later, and went on to win a Grammy for it.

Through the years, hundreds of other artists have recorded and performed “Always on My Mind.” It’s a song that has often been showcased on competition shows such as The Voice. Dallas Caroline’s Season 14 blind audition performance of the song has over two million views, while The Voice of Germany‘s Benedikt Köstler’s 2017 performance has over ten million views.

So when Team Kelly‘s Jake Hoot and Steve Knill hit the stage during Season 17 to battle over “Always on My Mind,” viewers knew they were in for something good.

The duo performed the song in Nelson’s style, with stripped down instrumentals that made their voices stand out. They started off taking turns singing solos, but did join in singing together more toward the end of the performance.

Their coach was clearly pleased with what she heard, and shouted “yeah!” at one point in the song. She even gave them a standing ovation at the end.

Once the song wrapped up, Clarkson had a hard choice to make. Her fellow coaches tried to offer her advice, with Blake Shelton saying he would go for something more “traditional” sounding and choose Hoot. John Legend agreed that he was more impressed with what Hoot brought to the table.

As for Gwen Stefani, she said she was “blown away” by both artists, and couldn’t name one as the winner.

That left everything up to Clarkson, who said they “both executed [the song] perfectly.” She said when it came to picking the winner, it was all about strategy. As in, which one of them would round out her team the best?

It seems she felt that person was Hoot, because she named him as the winner of the battle! Now tune in to his performance with Knill below to see if you agree with her choice.