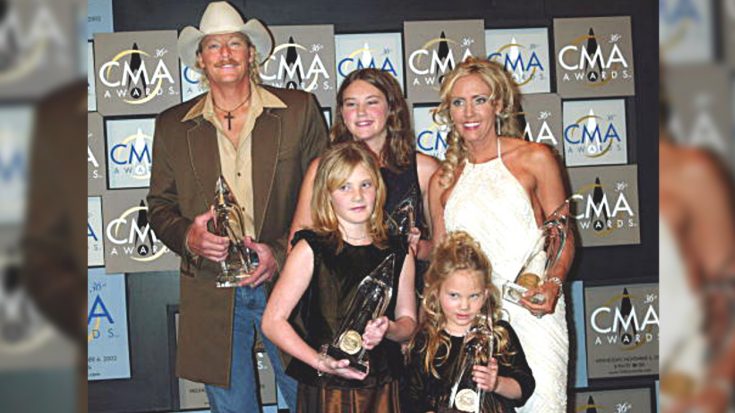 The Start of The Jackson Family

One of country music’s greatest love stories is the one shared by Alan Jackson and his wife, Denise. The high school sweethearts married in December 1979, and Alan kicked off his country music career a few years later.

He owes that career to Denise, who helped connect him with Glen Campbell after she happened to meet the “Rhinestone Cowboy” singer. Glen championed Alan’s career, and once he got started, it took him no time at all to start scoring hits.

The same year that Alan earned his first number one with “I’d Love You All Over Again,” he had another major milestone to celebrate. That was the year that he and Denise welcomed their first child, a daughter they named Mattie.

In the years that followed, the Jacksons welcomed two more beautiful daughters, Alexandra or “Ali” for short, and Dani.

While other country stars such as Garth Brooks and Tim McGraw and Faith Hill tried to keep their kids hidden, Alan and Denise seemed to be alright with letting their girls step in the spotlight every now and then. Alan has always made red carpet events a family affair, often bringing all three of his daughters along with him to awards shows and other special events.

Just look at this adorable photo of him, Denise, and their girls from the 36th CMA Awards in 2002.

That same year, all three of Alan’s daughters appeared in his music video for “Drive.” The video was so beloved that it earned nominations for Music Video of the Year at all of the major country awards shows, and won an award at the 2003 ACM Awards.

All Grown Up Now

Over the years, Alan continued to include his family in any sort of event honoring him and his career. In 2010, Denise and all three of his daughters were present to celebrate his induction into the Hollywood Walk of Fame.

The three Jackson girls and Denise were also on hand when Alan was inducted into the Country Music Hall of Fame in 2017. But if you haven’t seen photos from that event, you may be surprised to see how the girls look now.

On Thursday (June 14), Alan celebrated his induction into the Songwriter’s Hall of Fame. Of course, Denise and the girls were there, and all four ladies looked beautiful while walking the red carpet with Alan.

Keep in mind, the above photo of the Jacksons was taken in 2010. Now, eight years later, here’s what they all look like.

Alan’s girls are all grown up…and gorgeous! Looking at Alan and Denise, it’s easy to see where they get their good looks.

We’re sure it’s hard for y’all to believe that Alan’s daughters are as mature as they are. You probably best remember them as the little girls in Alan’s video for “Drive.” Throw it back to that earlier time by watching the heartwarming video below.