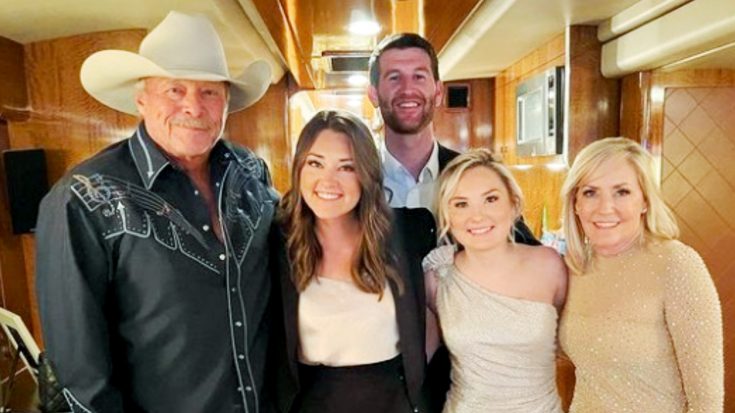 Alan Jackson was honored as CMT’s “Artist of a Lifetime” during its annual Artists of the Year event this year. He also performed during the ceremony.

Those who want to see Alan’s performance can watch the Artists of the Year event on CMT tonight (October 14) at 9/8c.

The Artists of the Year ceremony was actually held a few days ago, so we’ve already seen a few pictures from the event.

Alan attended the ceremony with his wife of nearly 43 years, Denise. Their eldest daughter Mattie, her fiancé Connor, and their youngest daughter Dani were also there to celebrate with them.

Alan and Denise’s middle daughter, Ali, was not in attendance. She is currently expecting her first child with her husband Sam Bradshaw, and is due to give birth in December.

Mattie shared some snapshots of her family celebrating Alan at the Artists of the Year event. She reflected on the “beautiful evening” in the photos’ caption:

“Best way to celebrate @officialalanjackson is all dolled up with these peeps!” she said. “What a beautiful evening and reminder the impact his remarkable career continues to have on so many as this year’s CMT Artist of a Lifetime.“

You can see the photos Mattie shared below.

Congratulations to Alan on being named CMT’s “Artist of a Lifetime.” It’s an honor he definitely deserved.