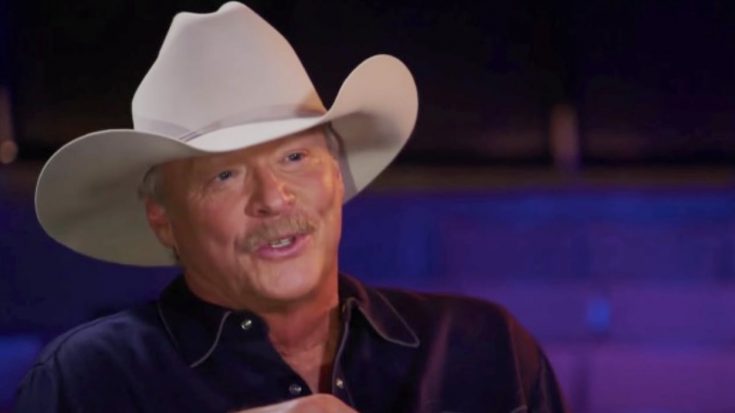 In September 2021, Alan Jackson revealed he has been diagnosed with Charcot-Marie-Tooth disease, also known as CMT. The degenerative nerve condition is hereditary, so it ran in Jackson’s family. His grandmother, father, and sister all had/have CMT as well.

According to the Mayo Clinic, some of CMT’s symptoms include weakness in legs, ankles, and feet, difficulty lifting the foot at the ankle, and frequent tripping or falling.

Jackson was actually diagnosed with CMT over ten years ago. But he kept his condition private until 2021, when the symptoms were starting to become more noticeable.

“…it’s been affecting me for years,” Jackson told TODAY. “And it’s getting more and more obvious. And I know I’m stumbling around on stage. And now I’m having a little trouble balancing, even in front of the microphone, and so I just feel very uncomfortable. And I just want people to know that’s why I look like I do, if they’re wondering…it’s just gonna disable me eventually.”

There is no cure for CMT, so Jackson will have to live with it for the rest of his life. Although it doesn’t affect overall lifespan, it could affect Jackson’s career.

When Jackson revealed his diagnosis, he wasn’t sure how much he’d be able to tour in the future. So fans were surprised when Jackson announced on Friday (March 11) he is embarking on a new tour in 2022.

Jackson’s new tour is called Last Call: One More for the Road. The name of the tour makes it sound like a farewell tour, but Jackson does not outright describe it as such:

“I’ve always admired my heroes like George Jones, Merle Haggard, Loretta Lynn and Charley Pride who just played as much as they wanted to, as long as they could,” Jackson said in a statement posted on his official website. “I’ve always thought I’d like to do that, and I’d like to as long as my health will allow.”

Jackson’s tour will kick off in the summer and continue through the fall:

“The three-time CMA Entertainer of the Year will thrill audiences – visiting cities and areas he hasn’t in several years for the last time – as fans relive hits like ‘Chattahoochee’ and ‘It’s Five O’Clock Somewhere’ night-after-night,” reads the press release about the tour.

$1 from every ticket sold will be donated to the CMT Research Foundation. The Foundation funds research for drug development related to CMT.

Tickets for most of the cities will go on sale on March 18. Flip through the slideshow below to see all of the venues Jackson’s visiting.