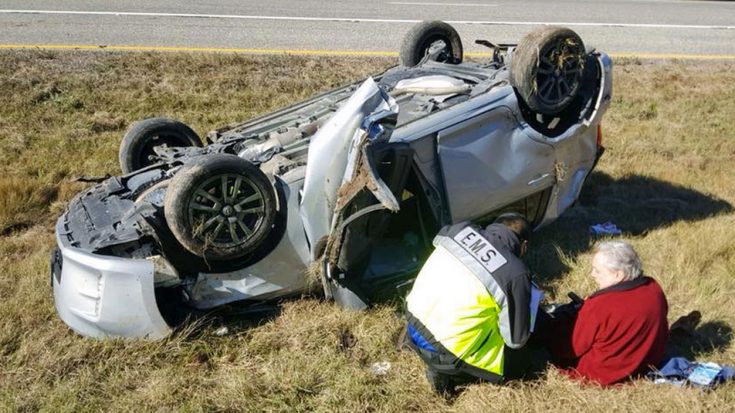 Just after the new year, country legend Mickey Gilley and his son, Michael were driving through Texas to Gilley’s theater in Branson, Missouri. Another vehicle ran through a stop sign at an intersection and crossed in front of them. Michael, who was driving, tried veering out of the way to avoid a head-on collision, but still ended up clipping the other vehicle.

The Gilley’s flipped their vehicle 3-4 times before it finally landed on its roof on the side of the highway. Mickey, 81, suffered a fractured left ankle, fractured right shoulder, cracked sternum, and cracked rib. In an interview with ABC13 KTRK News, he told them that “the air bags didn’t deploy” and didn’t know if it was “a blessing or a curse.”

“It was like slow motion,” he said. “The unbelievable feeling you get when you know you’re going to hit something and there’s nothing you can do about it.”

Mickey’s country music career began in the 1970s and leaned more towards pop-friendly sounds in the 1980s. After the release of the 1980 film Urban Cowboy, his career really took off. His biggest hits include “Room Full Of Roses,” “Don’t the Girls All Get Prettier at Closing Time,” and a remake of the iconic song “Stand by Me.”

Although the crash rattled him, he assured fans it wouldn’t end his career.

“To be 81 years old and put myself through what I’ve been through, it’s kinda tough sometimes on the old man, but I don’t intend to retire. I will be out there on the road and I’ll see you real soon,” he wrote on Facebook.

Several country stars played themselves in Urban Cowboy, which starred John Travolta, including Gilley and his friend Johnny Lee. Gilley and Lee have many great memories from the film and have often performed together. In fact, the two just announced they are going on a Urban Cowboy Reunion Tour! It will kick off on Jan. 26 in Stafford, texas and wrap up on  Nov. 27 at Mickey Gilley’s Shanghai Theater in Branson, Missouri.

“I am thrilled to have the opportunity to tour once again with my good friend. The Urban Cowboy craze kept my career alive for all of these years, and every night when I go to bed, I thank John Travolta for my amazing career. At 81, I am still rockin,” said Gilley, according to Broadway World.

Watch Gilley and Lee perform a medley of songs from Urban Cowboy below.