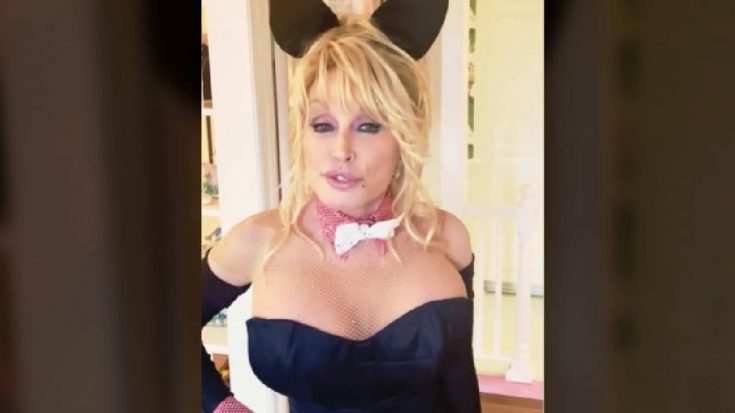 In 1978, Dolly Parton was asked to pose for Playboy Magazine and don the cover. She accepted, but refused to pose nude. Instead, she wore a black corset, black bunny ears, white bowtie, and a matching bunny tail and heels.

She shared one of her images from the photoshoot in a January 2020 meme that went super viral and started an online challenge!

We, of course, knew that someone had to design that now-iconic outfit, we just didn’t know who…until now.

While promoting his upcoming film The Matrix Resurrections, Keanu Reeves sat down with his co-stars for the Facebook Watch show Red Table Talk and revealed some news we never though we’d hear from him: his mother designed Dolly Parton’s Playboy costume. And he even once wore the iconic bunny suit!

“So my mother was a costume designer,” Reeves told his co-stars. “She made some costumes for Dolly Parton, and she once did the cover of Playboy, and somehow I guess she didn’t take that home. So we had it, and it was Halloween.”

“So I put on the ears and the bustier,” he said. “I wore sneakers with fishnet stockings and the bowtie. I had some pretty long hair, and I was Dolly Parton as a Playboy Bunny.”

Dolly recently recreated the look for her husband’s birthday. Check it out below.