8 Times Waylon Jennings Was A Badass 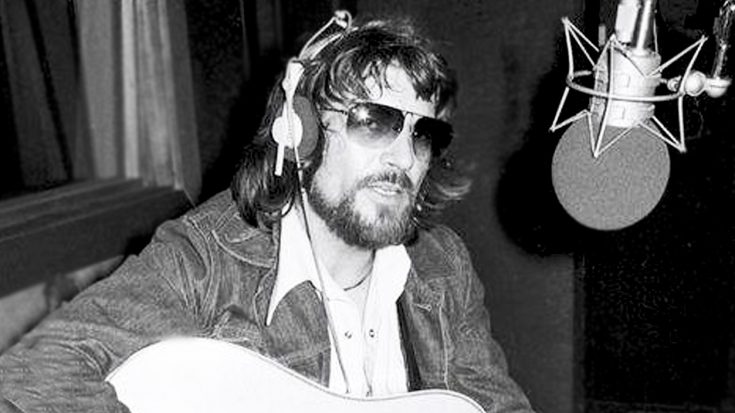 As one of the pioneers of the outlaw country movement, Waylon Jennings was a certified badass. There were many factors that contributed to this branding: his rough and tough image, his songs that celebrated wayward souls, and his indisputable talent.

Jennings managed to establish an unshakable reputation after only 64 short years on this Earth. Today, you’ll often hear Jennings get name checked by other country singers who consider him to be one of the greatest artists of all time.

Honestly, we’re not surprised that Jennings still has such a strong reputation today. After all, he was the defintion of badass.

Head below to see some of the most hard core moments in this country legend’s life!

1. The Time He Learned To Play Guitar As A Child

Believe it or not, Jennings was only eight years old when he learned to play guitar for the first time. Lenny Kaye wrote about Jennings’ childhood in his book, and revealed that his mother was the one who taught him to play guitar.

Since Jennings didn’t have a guitar of his own at first, he borrowed guitars from his family members so he could practice. Finally, his mother bought him a guitar and it was only a matter of years before he had his own 30-minute radio program at the age of 12.

2. The Time He Scored The First Platinum Country Album

Prior to 1976, no country artist had ever earned a Platinum-certified album. In order to earn a Platinum certification from the RIAA, an album has to sell a total of 1 million copies. It’s an impressive feat, one that Jennings was the first to accomplish with the album Wanted! The Outlaws.

He wasn’t the only one though. Jennings recorded the album along with fellow outlaws Willie Nelson, Jessi Colter, and Tompall Glaser. The Platinum status quickly established them as country icons and certified badasses.

3. The Time He Married An Outlaw Gal

Speaking of Colter, she’s wasn’t just an artist that Jennings collaborated with. She was his wife!

Jennings was married a total of four times in his life. But his fourth and final marriage was to Colter, who he married on October 26, 1969 in Phoenix, Arizona.

Marrying Colter ended up being one of the best decisions of Jennings’ life. They nearly divorced in the early 1980s, but worked through their troubles to become stronger than ever. They remained married until Jennings passed away in 2002.

Kaye wrote in his book on Jennings that he was quite the trouble maker in school. He had so many disciplinary infractions by the time he was 16 that his superintendent actually encouraged him to drop out of school.

Jennings took the superintendent’s advice, and went to work for his father in his produce store. But he finally completed his education 36 years later, when he earned his GED at the age of 52.

Two different books explain that Jennings finally decided to get his GED to show his son, Shooter, how important it was for him to get an education. Shooter followed his father’s example in another big way as well…he’s now a country singer himself.

5. The Time He Sang For & Narrated A Hit TV Show

Jennings played a huge role in the hit TV series The Dukes of Hazzard. He not only served as the show’s Balladeer, but he wrote and sang the theme song as well!

The theme, titled “Good ‘Ol Boys,” went on to became the biggest hit of Jennings’ entire career. It was a number one hit on the country charts and also peaked at the 21st spot on the Billboard Hot 100.

6. When He Recorded A Duet Album With Willie Nelson

Come on now, is there anything more badass than singing a song with Willie Nelson? You’re right…recording a whole album with Nelson is even more badass.

Jennings and Nelson were close friends and frequent collaborators. The two teamed up in 1978 for their appropriately-titled duet album, Waylon & Willie. The album contained songs that are now regarded as country classics, such as “Mammas Don’t Let Your Babies Grow Up to Be Cowboys.”

7. When He Joined A Country Supergroup

In the entire existence of country music, there has never been a supergroup that can compare to The Highwaymen. The group was made up of some of the leading male artists in country music at the time, which all happened to be outlaw legends.

Kris Kristofferson, Johnny Cash, Nelson, and Jennings were the four members that made up the iconic group. While they didn’t release many songs together, their number one single “Highwayman” is still a country fan-favorite.

8. When He Sang This Right Here

Between the song (Jennings’ smash hit, “Good Hearted Woman,”), the drive of the band, and Jennings’ enthusiastic delivery, everything about the performance just screamed “badass.” But to be honest, that’s the kind of vibe we get from any of Jennings’ performances!

Now we’d like to hear from you. Why do you think Jennings was such a badass? Let us know in the comments!