7 Songs That Slipped An Elvis Reference In The Lyrics 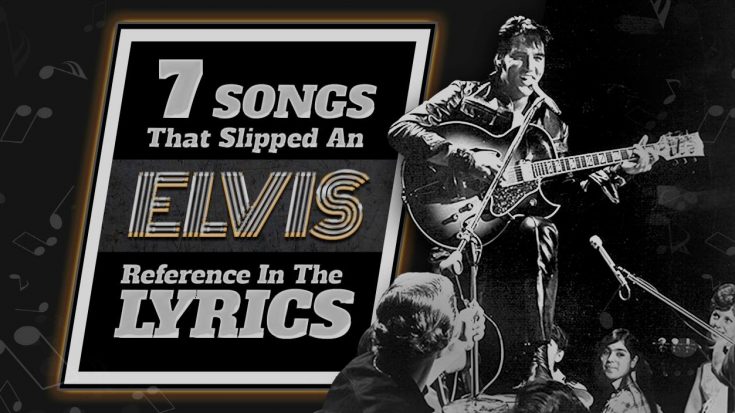 It’s obvious that Elvis Presley is one of the most-frequently referenced celebrities in all of music history. In fact, it’s likely that no other celebrity is mentioned in music as many times as “The King.”

Considering how much of an influence Elvis had on multiple genres in his lifetime, it’s no surprise that other artists want to offer a nod to him in their work. Some songs are clearly defined tributes to Elvis, and make no effort to hide that fact.

But many more songs make ever-so-subtle references to “The King” that last for only an instant. These references are so cleverly included that you’ve likely never noticed them before.

Today, we’re sharing seven songs with you that managed to slip an Elvis reference in the lyrics that has  basically gone unnoticed.

Go through the list, and see if you’ve ever picked up on these references before!

It’s understandable why the Elvis reference in Don McLean’s iconic song “American Pie” likely slipped past you. For starters, Elvis isn’t even referenced by name in the song, he is simply called “the king.”

Secondly, the sheer length of “American Pie” makes it easy to get lost in the song and miss the Elvis reference completely. It’s buried in the second verse, while most people only know the intro and chorus.

Last but not least, another reason why this particular reference is so sneaky is because it wasn’t obvious. In fact, the reference wasn’t even confirmed by McLean until 2015, which is when he finally revealed the meaning behind the song. Through a set of notes, he verified what fans had long thought…that the lyrics mentioning “the king” were about Elvis.

As for “the jester” referred to in this set of lyrics, that’s meant to be Bob Dylan:

“When the jester sang for the king and queen,
In a coat he borrowed from James Dean.
And a voice that came from you and me.

Oh, and while the king was looking down,
The jester stole his thorny crown.”

A Top Ten country hit for Alan Jackson in 1999, “Little Man” has Jackson reflecting on how small business owners suffer when big business takes over. He sings of all the small businesses that are no more, saying how major corporations have taken the place of the everyday “little man.”

So how does Elvis work into a song like this? Well, quite subtly to tell you the truth!

Jackson drops a reference to Elvis about mid-song, as he sings of how a bank came in and rented out what was once a humble gas station. But after the bank took control, it became something entirely different. He sings that they now sell “velvet Elvis,” at the station, which are paintings of Elvis done on velvet fabric.

In other words, what the station now sells is far more luxurious than something the “little man” would ever display:

“Now the bank rents the station
To a man down the road.
And they sell velvet Elvis and
Second-hand clothes.”

“We Didn’t Start the Fire” by Billy Joel

We don’t blame you if you never caught on to the Elvis reference made in Billy Joel’s “We Didn’t Start the Fire.” Joel names so many people in the song, it’s hard to remember even one person he mentions.

Just a few of the many non-Elvis celebrities and famous figures that Joel mentions in the song include Marylin Monroe, Einstein, and Buddy Holly.

Elvis’ mention comes after Joel sings the first chorus. His name is sandwiched between between that of Peter Pan and Disneyland:

“All I Want to Do” by Sugarland

Hidden in the peppy lyrics of Sugarland‘s chart-topping hit from 2008 is a flirtatious Elvis reference. But the reference is so small, that it likely flew right by you!

The nod to Elvis comes in a short, two-line intro to one of the choruses. It has Jennifer Nettles flirting with her love, asking him to come over for a kiss. That’s when she refers to his mouth by saying he has an “Elvis lip.”

Immediately after that, the duo jumps in to the song’s addictive chorus. So perhaps that’s why this Elvis reference seems to slip by:

“Give me a kiss, from that Elvis lip.
You don’t want to miss this.

If you’ve paid attention to this old-school Carrie Underwood track, this Elvis reference may have perked your ears before. But since “Last Name” is now an older song in Underwood’s repertoire, the reference is one you may no longer remember.

The song has Underwood singing of meeting a random guy in a club who manages to romance her after she’s had a bit too much to drink. Before she knows it, Underwood sings of how she woke up wondering why she suddenly has a ring on her left hand.

It’s in this verse, which pops up at the end of the song, that Underwood reveals she married her mystery man the night before. This is when the Elvis reference comes in, as the new couple apparently went to Vegas to get hitched:

“Today I woke up thinking about Elvis somewhere in Vegas.
I’m not sure how I got here,
Or how this ring on my left hand just appeared.”

“That Don’t Impress Me Much” by Shania Twain

Shania Twain‘s “That Don’t Impress Me Much” may contain the most obvious Elvis reference on this entire list. It isn’t hidden like in some of the other songs, and it’s not all that subtle either.

It’s the fact that throughout the song, Twain names a whole host of things and people that don’t impress her much at all. And where all of these lines are concerned, it’s actually her reference to actor Brad Pitt that more people remember than her reference to Elvis.

So when does that reference appear? It’s actually one of the final ones she makes in the song, after she sings the full chorus for the last time:

“Okay, so what do you think you’re Elvis or something…
Oo-Oh-Oh.
That don’t impress me much!“

“All My Friends Say” by Luke Bryan

Since both Luke Bryan and Elvis are known for their hip-shaking and sexy dance moves, it’s no surprise that Bryan gave a nod to “The King” in one of his songs. It’s also no surprise that the reference is actually about dancing.

This reference appears in Bryan’s debut single and chart hit, “All My Friends Say.” He sneaks Elvis’ name in a duo of lines that appears right before the final chorus.

In these lines, Bryan refers to how his friends tell him that he was taking over the bar like Elvis would. We can only assume this means that he was showing off a few frisky dance moves, just like “The King” was known for:

“I was Elvis rocking on the bar,
Working the crowd pouring out my heart.”

Now that you’ve gone through the list and listened to all of these songs, we guarantee you’ll always notice these Elvis references from this point on! Can you think of any other songs that slip a reference to Elvis in the lyrics? Go ahead and name them if you can!