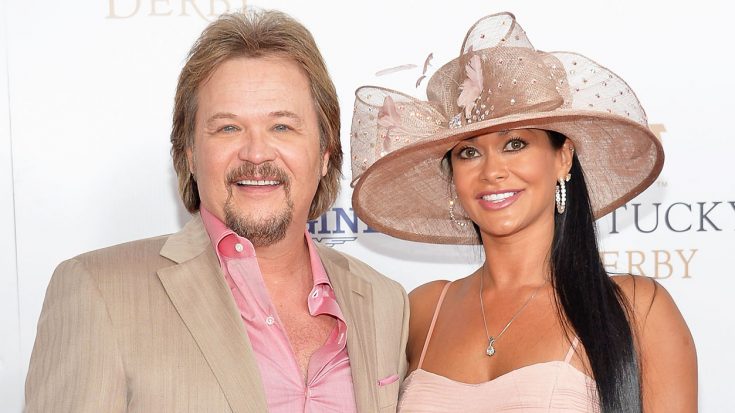 Travis Tritt and his wife, Theresa, met because of a chance meeting after a “Marty Party” taping with country legend Marty Stuart.

They began dating and were inseparable for the next three to four months, before the singer had to go out on the road for a few performances. Being apart from Theresa made Travis realize how much he missed her and after not being able to contact her for two weeks, he wrote the song “More Than You’ll Ever Know.” They have been together ever since.

The Tritts were married on April 12, 1997 and welcomed three children into the world shortly after.

We love how much Travis and Theresa love each other, so we’ve compiled a list of the top 7 times they completely blinded us with their love!

6. The Time They Matched At The CMAs

Dressed in all black, the Tritts stunned the CMAs with their matching outfits.

It shows just how well they complement each other! And they look incredible doing so! Dare we say best dressed of the night?!

5. The Time They Bundled Up For Warmth

In some parts of the country, it does in fact get a bit cold during the winter. (We’re looking at you, West Coast!)

Bundling up is a very important part of surviving the winter in some parts of the country, but the best way to keep warm is in the arms of a loved one.

Travis and Theresa have the right idea by keeping close to each other!

4. The Time They Were The Best Dressed Couple On The Red Carpet

The Tritts are not newbies to the red carpet, so it only makes sense that they have perfected their red carpet poses!

Travis and Theresa show off their love and unity on the red carpet with a simple hand hold. Not to mention, they were definitely the best dressed at this event!

3. The Time They Saw Mötley Crüe In Concert

Even musicians want to see other musicians in concert!

On a super fun date night, the Tritts went to see the legendary Mötley Crüe in concert. Oh, and the artist that opened for them? Alice Cooper…What a show! What a date!

2. The Time They Were Super Cute At The Kentucky Derby

The Tritts are regulars at The Kentucky Derby. From the fashion, to the horse racing, to the good food, we don’t blame them!

Usually, it’s Theresa who dons big hats, but this time Travis was wearing a fedora and loving on his beautiful wife!

1. The Time They Both Had Long Hair

Back when Travis Tritt first came on to the scene, he was not only known for his incredible voice, but also for his luscious locks.

He still rocks long-ish locks, but when he and Theresa first met, his hair was almost as long as hers!

Which cute couple moment between Travis and Theresa is your favorite?! Let us know in the comments!