7 Loretta Lynn Songs To Listen To 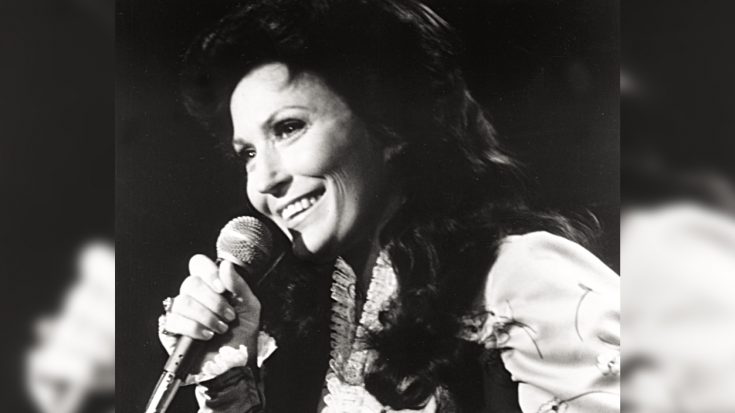 There is no one on Earth quite like Loretta Lynn.

She’s spunky, outspoken, beautiful, and not to mention talented! She broke down barriers for women in country music and is the most awarded female country recording artist.

She was the second of eight children born to a coal miner in Butcher Hollow, Kentucky. She married her husband, Oliver “Doolittle” Lynn, in 1948 at the age of 15 and had her first of six children when she was 16.

Her husband bought her a guitar in 1953 and Lynn taught herself how to play and eventually started her own band.

Soon after, she became the Loretta Lynn we’ve come to know and love. She has 16 No. 1 hits, 70 songs that made it on the charts, and has sung with many legendary artists including frequent duet partner, Conway Twitty.

Lynn’s lyrics focused on blue-collar women’s issues, cheating husbands and unwanted mistresses, inspired by issues she faced in her own marriage.

With so many iconic songs, it’s hard to narrow it down to the best ones, but we think we did it!

Let’s check out seven songs that prove Loretta Lynn is the ultimate Queen of Country!

Lynn was known for pushing the boundaries on controversial topics, but that’s one of the many reasons we love her!

One of her more controversial songs, “Rated ‘X’,” made headlines because of its frank language and message about the double stands for men and women, mainly dealing with the stigma divorced women faced during the early 1970s.

“Well if you’ve been a married woman and things didn’t seem to work out/
Divorce is the key to bein’ loose and free so you’re gonna be talked about/
Everybody knows that you’ve loved once so they think you’ll love again/
You can’t have a male friend when you’re a has been of a woman you’re rated X
And if you’re rated X you’re some kind of goal every man might try to make.”

The song was released in 1972 and became Lynn’s sixth No. 1 country single.

Another one of Lynn’s controversial songs was “The Pill.”

It was a comic-based song about birth control and a woman who was tired of getting pregnant every single year. She is happy that she can control her own reproductive choices because she got “the pill.”

Some speculate that the song is autobiographical, seeing as Lynn had three children before she was 19, and six altogether.

The song’s discussion of such a controversial subject led to many country radio stations refusing to play it. It still went on to be a huge success.

While she was touring, she saw the open country filled with meadows and hills and the lyrics just came to her.

“You’re Lookin’ At Country” was unlike anything she had been releasing, which centered around the themes of cheating husbands, adultery and fighting back. The song became quite popular and has since become one of Lynn’s most desired songs.

Loretta Lynn’s first ever No. 1 hit definitely had to make this list. “Don’t Come Home A-Drinkin’ (With Lovin’ On Your Mind)” has continued to be one of Lynn’s best-known songs since its release in 1967.

It’s about an angry wife who is fed up with her husband who comes home very late after nights of drinking expecting some lovin’ from his wife.

It was the first of her string of controversial hits. CMT has named the song No. 47 on their 100 Greatest Songs in Country Music List.

“Fist City” was inspired by a woman who was pursuing Lynn’s husband while she was on the road touring.

Lynn wrote the song as a warning to the woman to stay away from her husband, and if she didn’t she wouldn’t have a problem fighting her.

It became her second No. 1 in early 1968 and Lynn revealed in her 2001 autobiography that she did end up going to Fist City more than a few times with women.

“You Ain’t Woman Enough (To Take My Man)” was released in 1966 and inspired by a fan Loretta Lynn met backstage at a concert.

The woman confided in Lynn about how another woman was trying to steal her husband, and Lynn’s response was, “Honey, she ain’t woman enough to take your man.”

Right after the conversation ended, Lynn went to her dressing room and wrote the song.

“You Ain’t Woman Enough” peaked at No. 2 on the country charts and is now one of Lynn’s signature songs.

Lynn has many signature songs, but her best-known, most acclaimed, and most popular song is by far “Coal Miner’s Daughter.”

The song tells the story of her life growing up “in a cabin on a hill in Butcher Holler” while her dad worked all night in the local coal mine.

In the verses, she sings about her mother having to read the Bible by a coal-oil light, getting bloody fingers from the washboard, and ordering shoes from a mail-order catalog.

Since its release, “Coal Miner’s Daughter” has become one of country most iconic songs and was turned into a movie and served as inspiration for Lynn’s autobiography.

Let us know why you think Loretta Lynn is the Queen of Country Music!