7 Facts About ‘Smokey And The Bandit’ 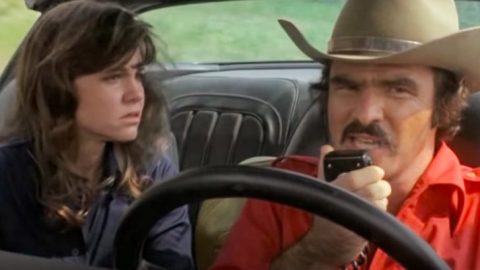 How “The Bandit” Cruised Straight Into Our Hearts

Filled with intense car chases and plenty of action, Smokey and the Bandit captivated millions when it was released on May 27, 1977. It maintains its iconic status today, and is still a beloved film by many.

Country fans have always felt a strong attachment to the film, which stars country music legend Jerry Reed in one of the main roles. The film also came equipped with a detailed soundtrack, which features a few contributions from Reed, including the track “East Bound and Down.” The song reached the second spot on the country chart, and is considered to be Reed’s signature piece.

The film’s all-star cast also includes Burt Reynolds, Sally Field, and Jackie Gleason. Together, the cast, plot, and soundtrack made for a classic film that has kept people entertained for decades.

Since it’s so popular, we’re sure you’ve seen Smokey and the Bandit a few times. But there’s a few facts about the film and its cast that you may not have known before. We have some of them to share with you right here! Just head down below to learn all about them!

Previously known as a stunt man, Smokey and the Bandit director Hal Needham made his directorial debut with the film. He also came up with the story behind it, which he had a lot of faith in.

However, no one else seemed to feel the same. As Needham confessed in a contributing article for Fortune, no one seemed keen on the idea of him directing a film. But everyone changed their tune once Reynolds was brought into the picture.

As the biggest movie star at the time, everyone wanted to produce a film of Reynolds’. Needham decided to market the film as a Reynolds project, and it worked. Universal Studios offered to back the project for $5.3 million.

We’d say that decision paid off for everyone involved!

Long before Needham got the backing from Universal, he had someone other than Reynolds in mind for the starring role. That someone else was Reed, who was going to take on the lead role when the film’s budget was only $1 million.

But once Reynolds agreed to take part in the film, Needham elevated him to the starring role. Reed was re-cast in the role as Bandit’s friend Snowman, and excelled at it.

Imagine how different the film would have been with Reed as Bandit…and no Reynolds at all!

Everyone who watched Smokey and the Bandit instantly fell in love with Snowman’s pet Basset Hound named Fred. Although the dog was playing the part of Reed’s pet, Reynolds was actually the one responsible for casting the canine.

Apparently, the dog in the film was personally picked by Reynolds. The reason why he settled on that particular dog? Because it refused to follow any commands!

Interesting way to go about casting, but it seems to have worked. Don’t know if the same would be the case for human actors though!

Cast as Sheriff Justice in the film, Gleason proved why he was one of the greatest actors of his era. Believe it or not, most of the lines Gleason recites in the movie were entirely improvised!

It takes a great deal of talent to be able to make material up on the spot like that. But Gleason was a pro at it, and his performance benefited as a result.

5. The Cars Could Hardly Run By The End

Smokey and the Bandit was responsible for introducing two new generations of the Pontiac Trans Am to the public. Surprisingly, the cast and crew only had to use three Trans Am cars throughout the entire film.

However, the cars weren’t in the best of shape by the time they were wrapping up. As Needham admitted in a DVD documentary about the movie, the cars could hardly run by the end of the whole thing.

You would never guess that watching the finished product though, would you?

6. Burt Reynolds Was Promised A Car If The Movie Hit It Big

On the same DVD documentary, Reynolds revealed that a senior executive at Pontiac had promised him a free car if the movie was a success. Specifically, the executive offered to give him a Trans Am like the ones used in the film.

As we now know, Smokey and the Bandit was a huge box office success. After the film’s release, the 1977 T-Top Trans Am started selling like wildfire.

However, some time passed and Reynolds never got a call from the Pontiac executive about the car he promised him. Reynolds didn’t want to seem like someone begging for free stuff, but he eventually decided to call Pontiac after a few months had passed.

Luck wasn’t on Reynolds’ side. As he learned, the executive he talked to previously had retired. The new executive refused to honor his predecessor’s promise, and Reynolds was left without a car. Ouch!

7. Jerry Reed Wrote “Eastbound And Down” In Mere Hours

When it came time to put the soundtrack together, Needham knew that it needed a theme song. Wanting to utilize Reed’s talent as a country music singer and songwriter, Needham asked him if he could write the movie’s theme.

Reed was happy to oblige, and came back to Needham in a matter of hours with the song that became “East Bound and Down.”

Acoustic guitar in tow, Reed started playing “East Bound and Down” for Needham, who was blown away by what he heard. He stopped Reed in the middle of his performance, making Reed think that Needham hated the song. He even offered to re-write the whole thing!

Needham’s response was priceless. “If you change one note, I’ll kill you!” he said.  Reed didn’t change a thing, and “East Bound and Down” became his signature song.

Which of these seven facts surprised you the most about Smokey and the Bandit? Let us know why you love the film down in the comments!