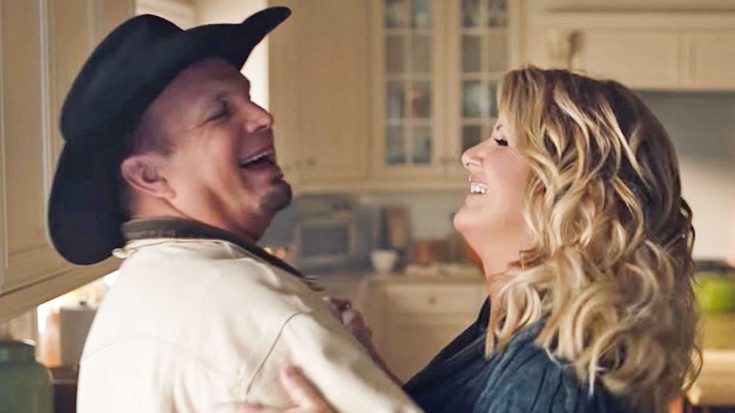 On December 10, 2005, Garth Brooks and Trisha Yearwood were married, and instantly become one of country music’s power couples. All of these years later, and Garth and Trisha are still one of the most-talked about couples in country music.

The duo has performed with one another many times in the past, and released their first album together in November 2016. Called Christmas Together, the album features Garth and Trisha’s renditions of beloved holiday classics. It topped the country charts following its release, further proving their power couple status.

During many of their interviews over the years, Garth and Trisha have been more than happy to gush about one another’s talents. Garth refers to Trisha as “The Queen,” and the nickname has stuck so well that other artists even referred to her as such at the 2016 CMA Awards.

Garth and Trisha’s affection for one another is clear, and it shows through in everything they do. So to celebrate the love that these two share, we’ve gathered up some of their most adorable moments that have ever been caught on camera.

1. When They Celebrated A “Marshmallow” Christmas

Every year, people young and old look forward to Disney’s Magical Holiday Celebration. The show is always filled with fun performances from some of music’s biggest stars, along with plenty of Disney magic.

For the 2016 production, Garth and Trisha were invited to come and perform one of the songs off of Christmas Together. They picked the sugary tune “A Marshmallow World,” and their performance was too sweet to handle.

Just one look at the smiles on Garth and Trisha’s faces as they sang is enough to make anyone blush. Seriously, have you seen a duet more adorable than this?

2. When Garth Had A Texas-Size Birthday Surprise For Trisha

Like he did the year prior, Garth had surprise in store for Trisha’s birthday, this time during one of their World Tour concerts in Texas in 2015.

The cake and tiara theme from 2014 carried over, with Garth once again placing a tiara on Trisha’s head after he led the huge Texas crowd in singing “Happy Birthday.”

Garth also surprised Trisha with a big bouquet of flowers, which she held in her arms as Garth and the crowd sang to her. Then, while placing the tiara on Trisha’s head, Garth thanked Trisha for being there, referencing his song “Friends In Low Places” in the process.

“I just want to tell you how much I love you and how much I thank you for spending your birthday with probably the best friends in low places that you will have,” he said.

After Trisha thanked the audience, she pulled Garth in for an affectionate kiss, much to the delight of the crowd.

3. When They Performed Classic Country Duets During The CMAs

The 2016 CMA Awards were all about celebrating country music’s history. As the 50th anniversary of the CMAs, the ceremony was packed full of tributes to country music greats.

Everything about the show was kept pretty hush hush, but fans knew from early on that Garth and Trisha would perform. Bit by bit, we learned that the couple was in charge of singing some of the greatest classic country songs and duets of all time.

Garth and Trisha sang everything from Conway Twitty and Loretta Lynn‘s “Louisiana Woman, Mississippi Man,” to Johnny and June Carter Cash‘s “Jackson,” as you see in the clip above. Their performance was highly-praised, and it’s no surprise why. These two are electric whenever they share the stage!

But beyond their vocal talents, this moment perfectly showcased the adorable nature of the couple’s relationship. Honestly, does it get any more romantic than singing classic country duets with the one you love?

It was quite the challenge to narrow down this list, because Garth and Trisha have shared so many sweet moments together. But out of everything we included here, which moment was your favorite?

We’d like to wish Garth and his “Queen” many more years of happiness together!