2020 CMAs Kick Off With Tribute To Charlie Daniels 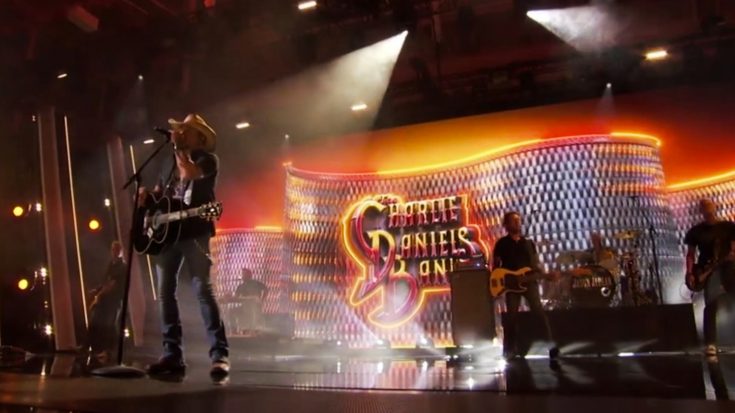 Ever since the world of country music lost the great Charlie Daniels, there have been tributes pouring out from fans, friends, and family alike.

Photos of grand times with the beloved musician, videos highlighting precious memories and career achievements, but there hasn’t been an official tribute to the late musical icon from a group of fellow country music artists yet – but that’s all changed now.

The 2020 CMA Awards have announced more than 20 unique performances for country music’s biggest night of the year and they range from classic artists like Reba McEntire duetting with Darius Rucker to Gabby Barrett and Charlie Puth collaborating – and even a song from Rascal Flatts who announced they were disbanding earlier this year. One of those was a collaborative tribute dedicated to the life and career of Charlie Daniels.

This performance was intended to feature Jason Aldean, Dierks Bentley, Brothers Osborne, Ashley McBryde, and Jenee Fleenor in a full-featured performance of many of his hits, however, Fleenor revealed that she would not be attending due to testing positive for COVID-19.

The rousing performance began with Dierks Bentley singing “Long-Haired Country Boy” moved into Brothers Osborne singing “Trudy” with Dierks. Ashley McBryde then came out to sing “Texas” with her colleagues and, finally, Jason Aldean stepped on stage and they all came together to sing “The Devil Went Down To Georgia.”

Never knew how much we needed that @DierksBentley x @brothersosborne collab until now. #CMAAwards have officially kicked off! ?? pic.twitter.com/WzVulk9Q9d

No one can do "Devil Went Down To Georgia" like @CharlieDaniels but @Jason_Aldean sure came pretty dang close. ? #CMAAwards pic.twitter.com/TVavz5kNLu

.@AshleyMcBryde is rocking that red guitar to help kick off the #CMAAwards with this incredible @CharlieDaniels tribute. ? pic.twitter.com/Ey84jcaljp

See this amazing performance below!