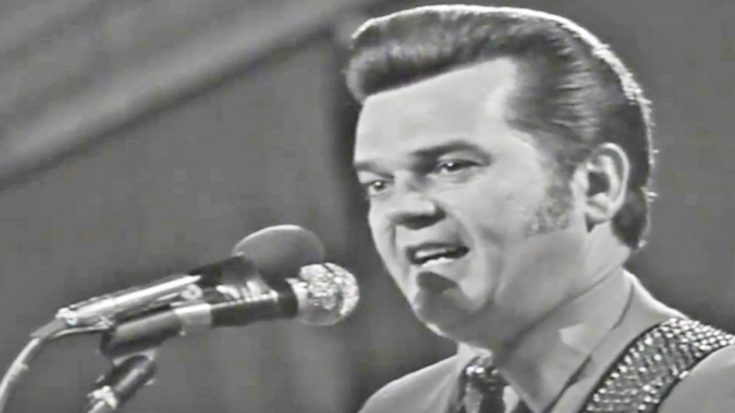 One of the best parts about being a country music fan is knowing that all of our favorite singers really do have respect for each other. They enjoy each other’s music, sometimes so much that they cover each other’s songs! This is exactly what happened in 1970 when Conway Twitty was performing at an event.

Watching this 1970 Conway Twitty gig. Bassplayer was like the mountain in 'thrones. pic.twitter.com/hWpET1NrJq

He performed a variety of songs for his fans, including a Hank Williams tribute and a Merle Haggard cover. The Haggard classic he performed was the solemn ballad “Sing Me Back Home.”

The song tells the story of an inmate at a prison, where another prisoner is being led toward the death chamber. The narrator, who often sings and plays guitar, was asked by the other prisoner to sing a familiar song before he has to die.

“Sing Me Back Home” was written by the late Merle Haggard and released on his album of the same name in 1967. It reached the number one spot on the Billboard Hot Country Songs chart.

January 20, 1968: Merle Haggard #1 on the Billboard country chart with "Sing Me Back Home" pic.twitter.com/hGhuygXUEP

The song was likely inspired by real events. Haggard spent a few years at San Quentin State prison and was close friends with an inmate named Rabbit, who was eventually executed.

While Twitty never lived this story, he performed it as though he did. Every lyric was more convincing than the last and you can tell from the video that the crowd was thoroughly enjoying what they were watching.

Take a look at the performance below.