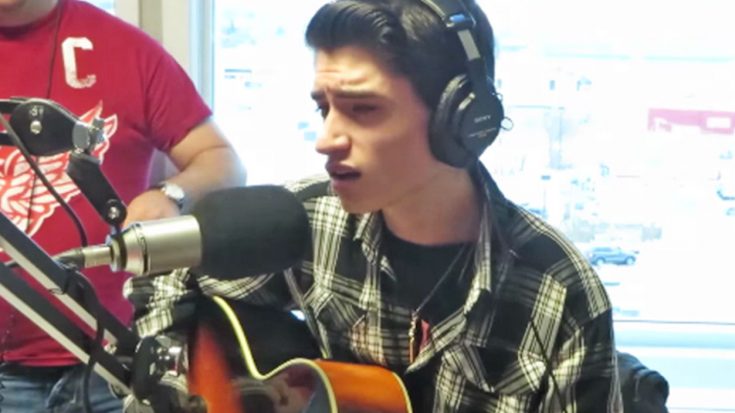 A teenager named David Thibault made waves online four years ago when he stopped by a local radio station to sing one of his favorite Elvis Presley tunes. It was Christmas time, so it was quite fitting that he chose the classic song “Blue Christmas.”

David is from Quebec, Canada, where they speak in French, so don’t be alarmed when you hear another language after clicking play on the video below! After being introduced by the DJ, David strummed his guitar and began singing, sounding identical to Elvis. As the camera zoomed out a bit, you can see one of the on-air personalities take a step back to admire David’s voice.

His video was seen by millions of people around the world, including Ellen DeGeneres, who invited him to be on one of her Christmas shows that year. She couldn’t get enough, even hugging him from behind while he was performing!

Some people thought he sounded so much like Elvis, they commented on the video, saying, “This kid is the is the reincarnation of Elvis Presley,” and we don’t completely disagree. Elvis’ sound was so unique – countless people imitate it, but it can never be perfectly replicated. Even David’s isn’t perfect, but it’s as close as we’ve ever seen!

“You can't be a quitter when you're caught up in the glitter of night life.” http://bit.ly/VivaLVFTD #MusicMonday #Elvis

David told Ellen that his grandfather introduced him to Elvis’ music and it just so happens that he has a voice just like him! Watch David’s cover of “Blue Christmas” below.