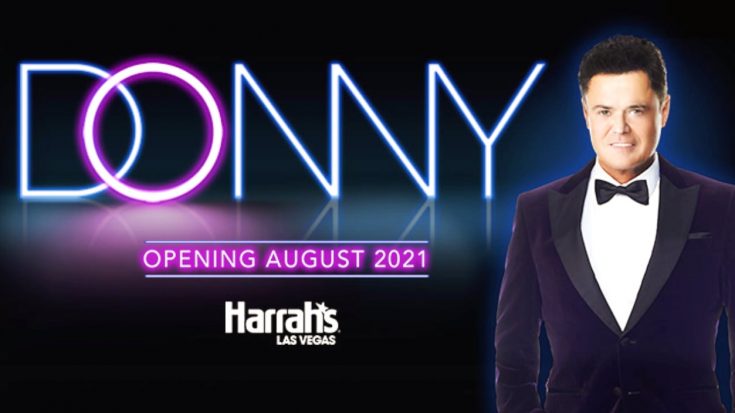 Donny Osmond is heading back to Las Vegas!

In November 2019, Donny and his sister, Marie, ended their 11-year residency at Flamingo Las Vegas. Although the show was one of the most popular in Vegas, Donny and Marie were ready to move on and pursue other projects.

After the residency ended, Marie co-hosted a season of The Talk while Donny kept busy working on a new album…and apparently, a new residency as well!

Donny spoke to the Las Vegas Sun to announce his new solo residency that will kick off next year. He will perform at Harrah’s Las Vegas on the Vegas strip, with his first stretch of shows being from August 31, 2021-November 20, 2021.

It turns out Donny was already thinking of embarking on this solo venture when he was wrapping up his residency with Marie. As he told the Las Vegas Sun:

“Right at the very end, [director] Raj Kapoor came to see the show…I played him some of my new album…and he said, ‘Donny, this is more than an album, this is a show…’ He envisioned doing a show about my entire life and presenting this new music. And right after the first of the year, we approached Caesars [Entertainment] and said, ‘What do you think?’ because Vegas is pretty much my home and I know them like family.”

He said “negotiations got very serious” just within the past three months, and he signed the deal on Saturday (November 14).

Donny said the new show will feature music from his entire career…which spans over the course of six decades. He has a plan in mind to entertain fans young and old, and to ensure they hear the songs they love most:

“...I have kids and young people that know me from ‘The Masked Singer’ or ‘Mulan’ or ‘Dancing With the Stars.’ It’s amazing how many younger people know who I am. So how do I satisfy that demographic and the ‘Puppy Lovers?’ So I came up with this concept where at some point during the show, we shut it down, the band and I come to the edge of the stage and it’s almost like a Q&A. And there’s this huge screen on the stage with all 63 albums on it.”

Donny says from there, he’ll take requests from the audience and will “do the song, no matter what they choose.” He said “maybe we only do 20 or 30 seconds of it, but that way we get through this big swath of music.”

If you’d like to get the chance to hear Donny sing your favorite song of his live, tickets for his new solo residency go on sale starting Tuesday (November 24).

Look below to watch the video Donny used to announce his new residency. He is such a skilled entertainer, so we can’t wait to see what he does with the show!

I am thrilled to announce my return to Las Vegas in August 2021 with my first-ever solo residency… exclusively @HarrahsVegas! ??