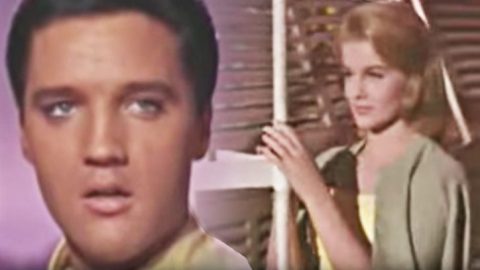 This chilling duet with his beautiful co-star, Ann Margret was removed from the final version of the film but is one that any true Elvis fan needs to see.

Singing “Today, Tomorrow, and Forever” with Ann Margret, Elvis Presley unfolds his smooth, sultry voice while sitting at the piano. Slowly, Ann Margret walks in through the door opposite the room and takes the vision in as she stands up against a bookshelf, adoring him with her eyes.

This scene, which was cut from the final production moves through several clips of both Elvis and his dame together and enjoying their time, looking lovingly in each other’s eyes. They danced, they flirted, they went waterskiing, and other things. All of this is shown while Elvis’ smooth vocals caress your ears and soar through heart-melting melodies.

If you’ve ever watched an Elvis movie, you know how classic and special they can be – and this rare deleted scene is no exception.

Watch Elvis Presley and Ann Margaret’s rarely-viewed scene from Viva Las Vegas in the video below.