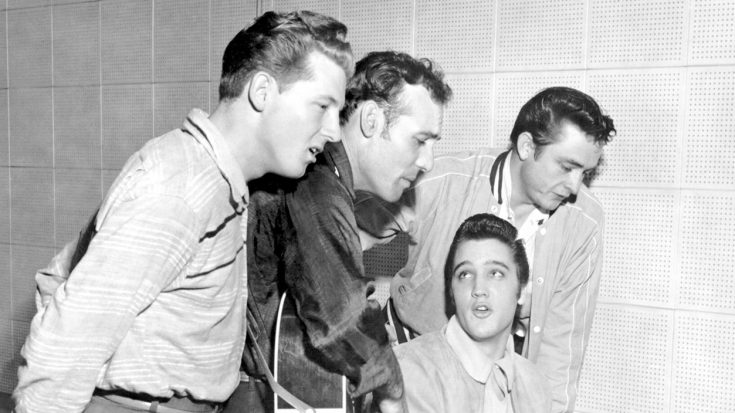 You’ve all seen the photo.

An impromptu jam session between Elvis Presley, Jerry Lee Lewis, Carl Perkins, and Johnny Cash was photographed, as well as recorded, in 1956 and the rest, they say, is history. What if we told you that isn’t the whole story?

Let’s start from the beginning.

Perkins was in the Sun Records studio on December 4, 1956  to record new music, while an unknown Jerry Lee Lewis was brought in by Sun Records owner Sam Phillips to play piano for Perkins’ session. Cash, a Sun Records artist, had stopped by to watch the session and Presley, the most famous of the bunch, had stopped by to visit his former record label.

Somehow, for some reason, the four of them began jamming, and now it’s known as one of the most famous moments in rock and roll.

The photo of the jam session is now iconic, but little did we know, there’s something missing from the one that is widely circulated.

There was a fifth person in the photo.

Cash’s son, John Carter Cash, shared the original photo on his Facebook page, explaining that the fifth person is usually cropped out – but he’s actually a very important person.

“For some reason, the person to the far left is typically cropped out of the photo. This man was at the time Carl Perkins’ drummer. WS “Fluke” Holland went on, beginning a few years later, to become Johnny Cash‘s drummer until the end of Johnny’s working career,” he wrote accompanying the photo.

See the original photo below.

Actually there are two different photos of the Million Dollar Quartet that circulate and they both have five people in it. One has WS Holland, and the other includes Marilyn Evans, Presley’s girlfriend at the time, sitting on the piano. Both people are often cropped out of the iconic photos.

See the photo with Evans below.

We’re glad John Carter Cash shared this rare piece of history for us to enjoy!

Take a listen to Perkins, Presley, Cash and Lewis perform “Don’t Be Cruel” during their famous jam session in the video below.