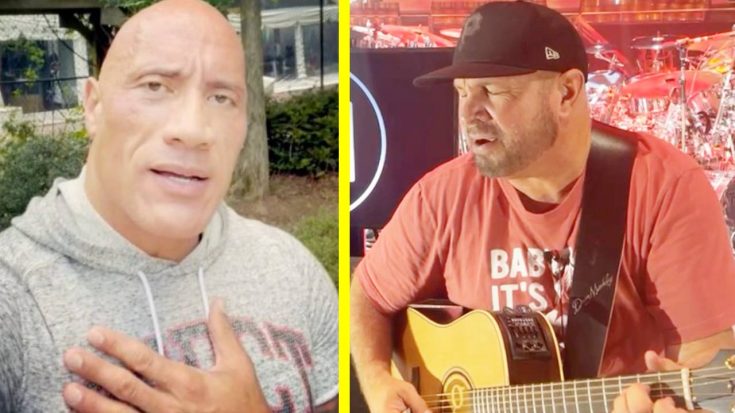 On Instagram this week, Dwayne “The Rock” Johnson posted a video giving a shout-out to a fan named Missy, who has been battling cancer for six years.

Before encouraging her to stay strong, Johnson said, “I’m so excited right now to deliver this very special message. I’m so excited my cheeks are red. I also know you’re Garth Brooks’ biggest fan. You know I love my country music. So in the spirit of Garth, this one’s for you.”

He then began singing Brooks’ “Much Too Young (To Feel This Damn Old),” but his voice kept cracking. Johnson said he’d tag Brooks so he could sing the song for her.

Johnson used the caption of the post to further make fun of his singing abilities, writing, “I apologize about my singing in keys that don’t exist and sounding like I’m experiencing puberty again.”

Johnson posted this video on Sunday and Brooks saw it right away. He commented on the video, thanking the wrestler-turned-actor for tagging him and pledging to pick the song up where “The Rock” left off.

During Brooks’ weekly “Inside Studio G” Facebook live, it was the first thing he did, like he promised.

After Brooks performed the song, he said he didn’t “buy the fact that he can’t sing,” and his producer assured him The Rock can actually carry a tune!

Watch Brooks’ respond to The Rock’s Instagram post and sing “Much Too Young” for their fan, Missy, below.