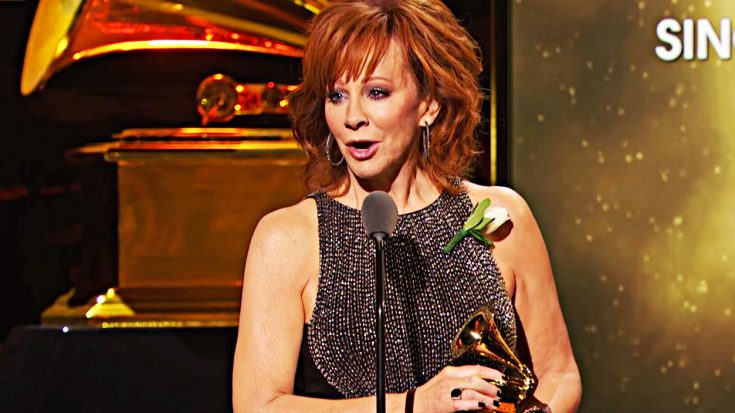 After winning her very first Grammy for Best Roots Gospel Album, Reba took the stage and gave a speech that never made it on the televised event.

Standing in front of the massive audience holding her statuette, she delivered a heartfelt and tearful speech thanking all of those who helped make this dream of hers become reality.

“I’m a country artist,” she said humorously. “But I’ve been singing these songs that’s on this album all my life, on the pond down at Grandma’s house singing ‘Oh, How I Love Jesus …’ and it’s so great to get those songs on an album.”

In the early stages of developing the record and its concept, Reba acknowledged how a man who is no longer with us helped shape and encourage her to cut a gospel album.

“Bill Hearn’s not with us to be here to celebrate this today – I know he’s looking down on us and I’ll never forget the day we were sitting there with Bill and Jim Weatherston and our team, talking about doing a gospel album.”

Hearn was the CEO of Capitol Christian Music Group, and a close friend of Reba’s. Tragically, he passed away in mid-December 2017 after a battle with cancer.

She continues on, talking about healing hearts and getting teary-eyed expressing that she knows she was put on the Earth to help people find their way through music.

This acceptance speech wasn’t aired because of time limitations on the television network, but The Recording Academy uploaded it to their official Grammys YouTube channel.

Watch Reba’s heartfelt acceptance speech about “giving it back to God” below.