Reba Cries During 2019 Acceptance Speech For “Artist Of A Lifetime” 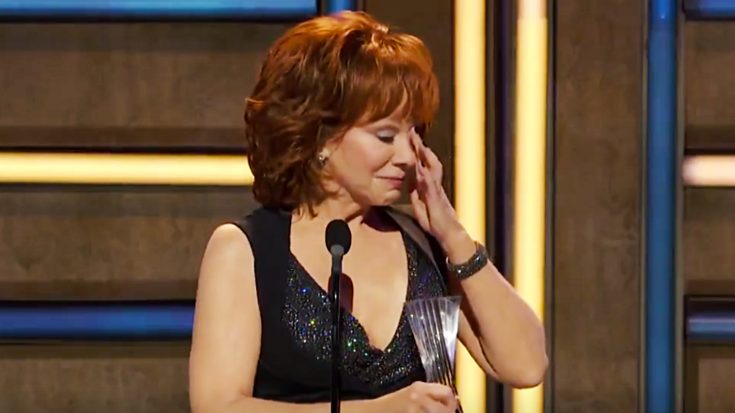 Crowned as the CMT Artist Of A Lifetime, the one and only Reba McEntire was honored in a bevy of ways throughout the night – and one of those was through both Lady Antebellum and Sam Hunt performing some of her biggest hits!

And as the recipient of such an honor, surrounded by a sea of people she has known for some time now, Reba absolutely was thrilled to give her acceptance speech.

No, this wasn’t one of those things that she memorized and had rolling through a teleprompter – it was real, raw, and straight from the heart.

Vince Gill, who presented the award to her, stood by her side just a few feet away while she delivered one of the most impactful and faith-filled speeches of the evening.

She brought something to the stage that many might not expect or agree with: God. “And we could all do with a little more God in our lives.”

Acknowledging Thomas Rhett for saying a prayer on stage in front of hundreds – and on television – Reba expressed her deep appreciation for his commitment to his faith and willingness to share it so openly.

Thomas said a prayer in honor of Kane Brown’s recently-passed drummer who was killed in an automobile accident earlier this week.

And in defense of Thomas’ choice – Reba looked straight at the cameras and said “That better have made the cut.”

Reba is truly the voice of a generation.

Watch her beautiful speech below. And let us know if you think this world could do with a little more God, too.