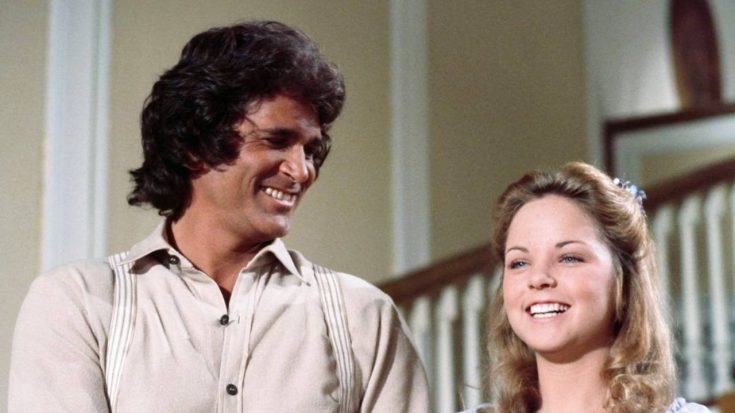 After wrapping up Bonanza in 1974, Michael Landon went on to land another huge role on the TV show Little House on the Prairie. He played Charles Ingalls for the entirety of the series, which ran on NBC from 1974-1982.

Landon not only starred in the series, he also directed 87 out of the 204 episodes – the most of any director the show had, and served as the executive producer for the entirety of the series. Because of his roles in front of and behind the camera, he was viewed as a father-type figure to most of the young actors on the show, except for Melissa Sue Anderson, who played his eldest daughter Mary Ingalls.

@out_ashley That lass from Little house on The Prairie. Mary Ingalls. pic.twitter.com/toph5h2J5o

Melissa was interviewed by People in 1980, where she revealed, “Mike was not so much a father figure as a big brother.”

Michael Landon as Charles Ingalls and co-star Melissa Sue Anderson as Mary Ingalls in Little House in the Prarie 1974-1983. pic.twitter.com/dhq73guQ6y

Following Little House, Melissa admitted they didn’t stay as close, saying, “I don’t see him as much, I think I’ve grown up, and Michael’s whole life is changing —he’s making some personal as well as professional decisions.”

Those personal decisions she was referring to was him marrying his third wife, Cindy Clerico, who was a makeup artist from the show. They began an affair while he was still married to his previous wife, Marjorie Lynn Noe, who Melissa and the rest of the cast had grown close to.

She recalls, “For us, as kids, it was a real blow. Although we knew he could be difficult at times and had his flaws, we never dreamed he was capable of inflicting that kind of pain on his real family. For me personally, I had held him up to a higher moral standard. He had really let me down.”

#HappyBirthday to the real Charles and Mary Ingalls! They were born on Jan 10th. Learn more about the real Ingalls family and how they compare to the TV version in our post by @Trundlebedtales. https://t.co/sC5mfxTR7s #LHOTP #LauraIngallsWilder #LittleHouseonthePrairie pic.twitter.com/dXBVkHsj4y

Despite their distance in the 80s, Melissa worked with Michael on some of his last projects before he passed away in 1991.