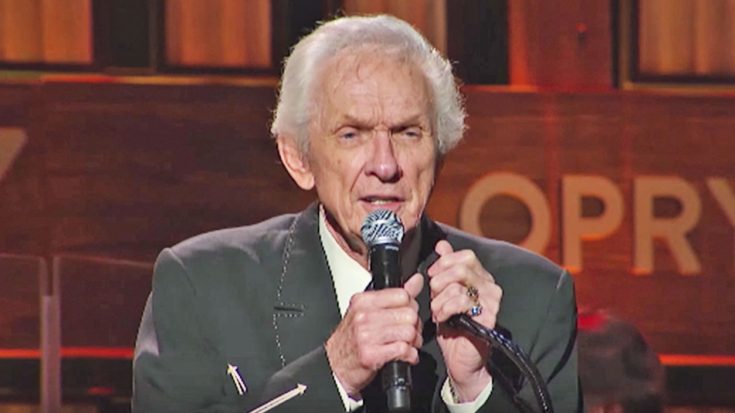 On Novemeber 19, 2017, the world lost the legendary Mel Tillis, singer of hits like “Coca-Cola Cowboy,” “Good Woman Blues,” “Send Me Down To Tuscon,” and many more. Not only was he a wonderful country singer, but he was also an incredible songwriter as well.

Mel sadly passed away at the age of 85 after battling intestinal issues since 2016. Like many country singers, Mel was a member of the Grand Ole Opry. Although his career in Nashville began in the 1950s, he didn’t become a member until 2007, 50 years after his very first appearance. According to the Opry’s website, it was his extremely busy schedule that prevented him from becoming a member sooner.

“I always wanted to be a member of the Opry,” Mel said, according to the website. “But I was always gone. I was doing the Johnny Carson show, the Merv Griffin show, the Mike Douglas show — every show you could name — the Dean Martin show, Hollywood Squares and 13 movies. I just didn’t have the time to commit to being a member.”

When he did become a member, he performed there several times a year, bringing a rich history with him each time, up until his final performance on December 11, 2015, just a few weeks before he got sick. He performed “The Arms of a Fool,” a single he released in 1970 off his The Arms of a Fool/Commercial Affection album with special guest Eddie Stubbs.

Even at 83 years old, Mel was as charming as ever and still captivated his audience from start to finish. He is a true country legend that is missed dearly, but we are thankful for videos like this one so we can remember him.

Watch Mel perform for the last time ever on the Grand Ole Opry stage below.

A presence on and off the stage, it was an honor to witness your greatness Mel Tillis. ❤️