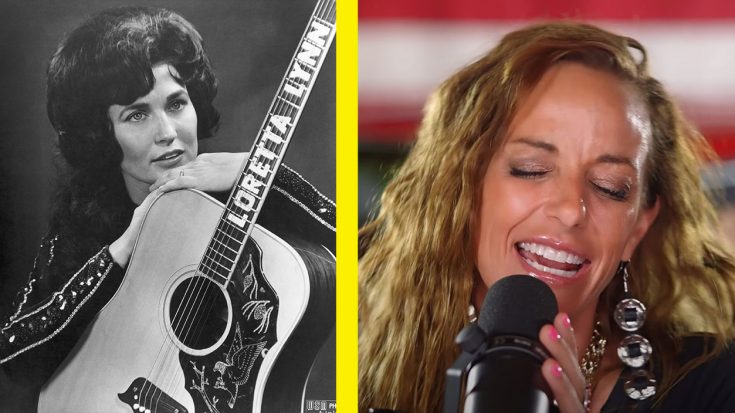 Tayla Lynn is the incredibly talented granddaughter of Loretta Lynn, and she definitely inherited her “memaw’s” love for country music. Her father, Loretta’s son Ernest, sang and played guitar in Loretta’s band when Tayla was young, so her entire childhood was filled with the sounds of classic country music.

Recently, Tayla stopped by the Country Rebel headquarters in Ashland City, Tennessee to perform her version of her grandmother’s 1966 hit, “You Ain’t Woman Enough.” She performed the song acoustically with her guitar players, and a fiddle player while the whole thing was filmed live.

“You Ain’t Woman Enough” is the title track of Loretta Lynn’s second studio album, which was a Number 1 Country album in 1966. Lynn, who was always approachable to her fans, wrote the song after a fan snuck into her dressing room. The fan told Lynn that her husband was cheating on her with a woman who would be in the audience. After hearing of the poor woman’s plight, Lynn reassured her that the rival wasn’t woman enough to take her man – in about ten minutes, Lynn penned the entire song and performed it that night.

Loretta’s granddaughter performed the song as if it was her own. Her voice is especially suited for a classic like this one. Obviously, the talent and love for country music that runs in the family got passed down!

Watch Tayla’s performance in the video below.