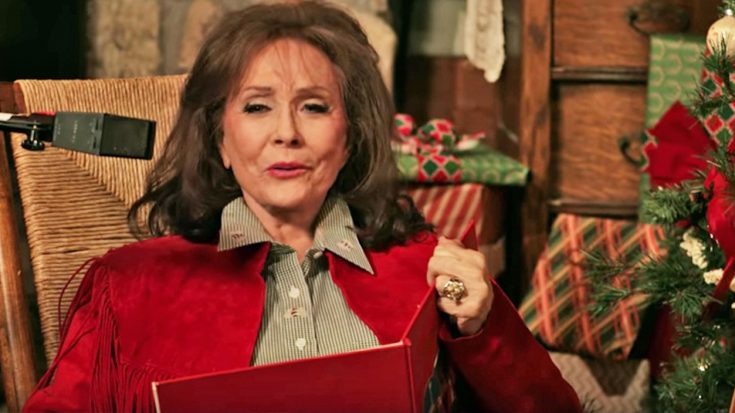 Sounds like Loretta Lynn has a bone to pick with Santa Claus. In a live performance of her 1966 Christmas tune, the country music legend rages a war on the man in red with feisty “To Heck With Ole Santa Claus.”

“When he goes dashing through the snow, I hope he falls,” sings Lynn while John Carter Cash strums along on his acoustic guitar. Donning her most festive Christmas attire, Lynn delivers a playful acoustic performance of “To Heck With Ole Santa Claus” that is sure to bring a smile to your face.

The country singer roasts Ol’ St. Nick after he forgot to bring her a present one year, dragging him through the snow with lyrics like “I like to hit him in his (ho ho ho) with a bunch of big snowballs.”

The festive tune appear on Lynn’s 2016 holiday album White Christmas Blue, however “To Heck With Ole Santa Claus” was originally released off Lynn’s 1966 holiday album Country Christmas. Lynn was inspired to write the hilarious tune after her husband Mooney forgot to buy her a gift one year for Christmas according to Loretta Lynn’s Ranch official Facebook.

You can watch Lynn’s performance below.