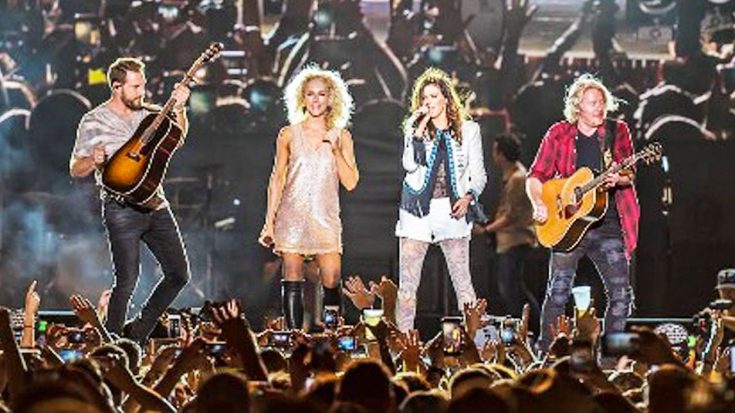 Eagles’ Influence Soars To Other Genres

The Eagles may have been a rock band, but their influence has reached beyond the rock genre. Their music is so iconic, that it is enjoyed by fans of all genres, including country.

One of the Eagles’ most popular songs of all time was their 1979 single, “Heartache Tonight.”

Featured on the group’s album The Long Run, “Heartache Tonight” topped the Billboard Hot 100 chart. It also claimed the top spot on the charts in Canada, and broke into the Top Ten on several charts around the world.

All these years later, and “Heartache Tonight” is still a major crowd-pleaser. So you can bet that the crowd goes wild whenever someone decides to cover the song at one of their own concerts.

A Country Take On A Rock Classic

Such was the case when Little Big Town performed “Heartache Tonight” during their set at Luke Bryan‘s 2017 Crash My Playa.

Joined by country singer Kelleigh Bannen, Little Big Town ended up delivering a cover of “Heartache Tonight” that brought down the house.

Luckily, a fan captured the moment on film and shared the video online for all to see. The crowd was hooked on Little Big Town’s performance from the get-go, and could be heard singing along to every word.

This performance perfectly showcases Little Big Town’s greatest strength, their impeccable harmonies. There are so many moments throughout this performance where their harmonies can only be described as jaw-dropping.

Once Little Big Town brought their performance to a conclusion, the crowd rewarded them with a thunderous round of cheers and applause. It’s clear they enjoyed what they heard!

A Kick Off To A Big Year

Little Big Town’s performance at Crash My Playa was only the start to an exciting year for the group.

They released a new album, The Breaker, on a month later, which contained the hit single “Better Man.” The song was written by none other than Taylor Swift, who sent it to the group because she felt that their harmonies would be a good fit for it.

Swift was right, and fans felt the same way. “Better Man” climbed to the top spot on both the Billboard Hot Country Songs chart and the Billboard Country Airplaychart.

While their cover of “Heartache Tonight” doesn’t appear on The Breaker, we think Little Big Town should consider including it on a future record!

Until then, we can enjoy their live performance of the song at Crash My Playa. Tune in below to check it out!