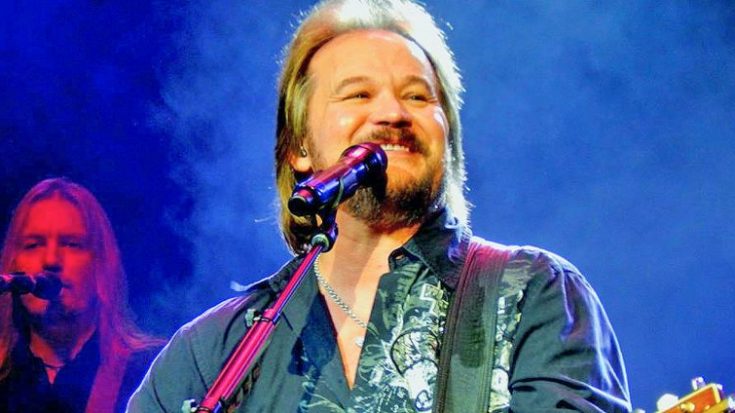 A proud member of what many country music aficionados call “The Class of 1989”, Travis Tritt admits he “stood out like a sore thumb.”

1989 was the year Clint Black, Garth Brooks, Vince Gill and Alan Jackson released their first singles, as well as Mary Chapin Carpenter and Tritt himself. These artists are known as Nashville’s Class of ’89 and they are all still wildly popular and still performing to this day, almost 30 years later.

Tritt says he stood out from the rest of his “classmates” because “all those guys were clean cut and a lot wore cowboy hats. I wore a lot of leather and had hair down almost to my waist.”

He kicked off his career with his first single “Country Club” becoming a massive hit and released his debut album shortly after. He avoided the dreaded “Sophomore Album Jinx,” gained a growing fanbase that compared him to the legendary Hank Williams Jr., and scored himself seven certified platinum albums during his career.

Over the past 28 years, Tritt has received two Grammys, four CMA awards, and became a member of the Grand Ole Opry in 1992. While he has lived his life in the public for almost three decades, there are still a few things most people don’t know about him!

Let’s take a look at five things that you probably don’t know about the great Travis Tritt!

1. An ‘American Idol’ Judge Produced One Of His Albums

Tritt met American Idol judge Randy Jackson while he was recording a duet with singer Sam Moore, of the R&B duo Sam & Dave.

“When I came out of the vocal booth, Randy – who was producing – had this sort of mouth-open, puzzled look on his face. I thought I’d done something wrong,” he said, according to CantonRep.

Apparently, Jackson was blown away by what he heard from Tritt and said, “Man, I’ve been a Travis Tritt fan since the beginning but I never had any idea you had that blue-eyed soul in you. If you ever want to do an album that showcases that sound, let me know.”

2. The Age Range At His Shows Is Huge

Since Tritt has been around for 28 or so years, many of his fans have had children, who are now fans. Tritt claims that a regular audience for him includes people from ages 8-80!

“My audience demo seems to go from 8 to 80,” he said proudly, according to CantonRep. “The only reason I can give for a lot of the younger faces is they grew up listening to my music because their parents listened. A lot of young people say, ‘Country is too twangy for me.’ But the music I was doing when I was first coming out had more of a Southern-rock influence to it, and without a doubt that’s one of the things that bridged the generation gap. It wasn’t too twangy for the younger kids to enjoy.”

3. He Was Great Friends With George Jones And Johnny Cash

When Tritt first moved to Nashville, George Jones was one of the first people he met. Throughout the years, they played many shows together and Jones’ energy was infectious. He said that “there was always a joke he wanted to tell you”.

He was introduced to Johnny Cash by Marty Stuart, and the two hit it off immediately

“We really connected and he basically took me under his wing. He taught me so much about what it means to be an artist in this business,” he said. “When he passed away, I went to my office and found a stack of letters John had written me in his own handwriting, and I read those letters realizing how much wisdom I was able to attain learning at his feet.”

He often plays his own version Cash’s iconic song “I Walk The Line” at his live shows.  Watch him perform it below.

4. His Daughter Is An Incredible Singer

Tritt’s only daughter, who is now 19, has been singing for her entire life and is seriously considering pursuing a career in music. She joined him on his song “Sometimes Love Just Ain’t Enough” in 2013, when she was just 15 years old.

“All my kids are extremely talented – they all sing and all play instruments,” he told CantonRep. “But she has seemed to have the most interest in pursuing it as a career. I took her on a few band dates last year and she just floors people with how big a voice comes out of that small body.”

5. You Can Thank Travis Tritt For Getting The Eagles Back Together

When the legendary rock band Eagles famously disbanded in 1980, fans were devastated. Over the next four years, members of the band would release solo projects and because of their new success, no one knew if they’d ever get back together.

In 1993, a whopping 13 years after the break-up, Tritt recorded a cover of their hit song “Take It Easy” and insisted the group get back together to be in the music video.

They agreed and ended up playing his backing band in the video. One year later, the Eagles formally reunited.

Which fact were you most surprised about? Sound off in the comments below!