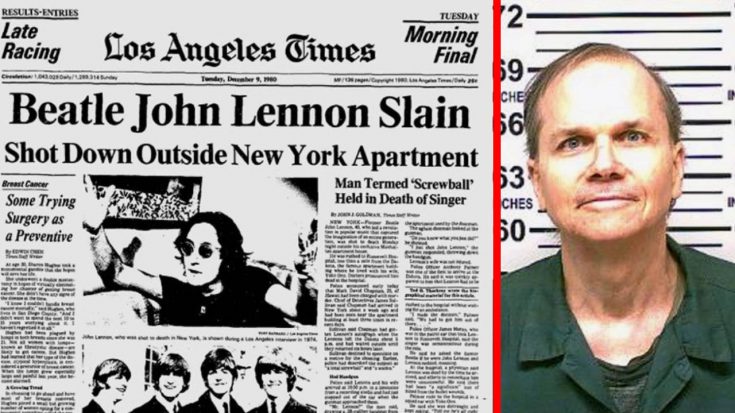 A man named Mark David Chapman shot Lennon in the back four times as he was walking into The Dakota in New York for a late-night recording session with his wife Yoko Ono. Just six-hours earlier, Lennon had signed a copy of his album Double Fantasy for Chapman.

Ten minutes after the shooting took place, Lennon was pronounced dead in the emergency room of Roosevelt Hospital.

The world was shocked to hear about Lennon’s death, who was just 40 years old when he passed away. Chapman didn’t go to trial for the assassination of Lennon because he pleaded guilty to second-degree murder, giving him a sentence of 20 years to life.

He became eligible for parole in 2000 after serving the minimum 20-year sentence. He has had a parole hearing every two years since then and has been denied 10 times.

On August 19, Chapman had his 11th parole hearing at Wende Correctional Facility in New York, where he has been the last eight years. He was once again denied, with the parole board saying he “would be incompatible with the welfare of society.”

Chapman was 25 when he killed Lennon and told the parole board he now sees what he did as “pretty creepy” and a “despicable act.”

According to The Telegraph, the parole board asked him if he felt justice had been served. He said, “When you knowingly plot someone’s murder and know it’s wrong and you do it for yourself, that’s a death penalty right there in my opinion. If the law and you choose to leave me in here for the rest of my life, I have no complaint whatsoever.”

His next parole hearing will likely take place in 2022.