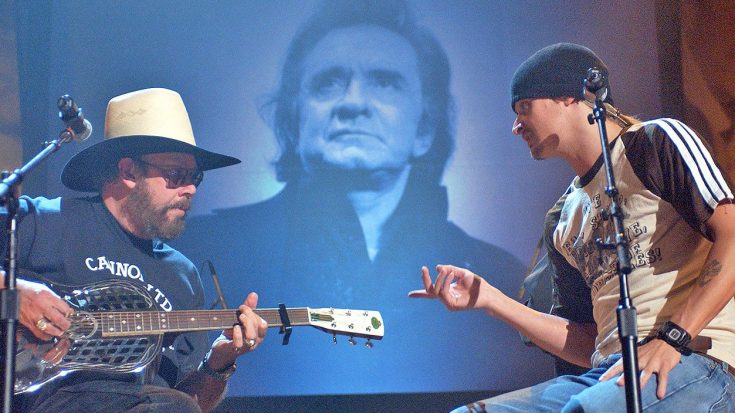 No one can replace The Man in Black. He is a legend in country music as a singer and a songwriter. At the CMT Memorial Tribute to Johnny Cash, Kid Rock and Hank Williams Jr. did their best to honor him.

While introducing their song dedicated to Cash, Kid Rock wanted to be clear that he did not know Johnny as well as many people in the audience did, but he did want to comment on the strength Johnny’s children have for dealing with his passing.

He said that from their strength, he can tell what type of man Johnny Cash was. At this point, you can see Cash’s daughter, Rosanne Cash, and her younger brother, John Carter Cash, embrace each other.

Love, comfort, and hospitality were always served up at Johnny and June’s table, particularly around the holidays. #johnnycash #cashfamily #Holidays

A Tribute Fit For A King

After a round of applause for Cash’s children, Kid Rock and Williams start playing his hit song “There Ain’t No Good Chain Gang.”

This song was recorded by Cash as a duet with fellow legendary outlaw country singer, Waylon Jennings, in 1978. It was written and sung from the perspective of a prison inmate who is writing to his family.  The duet reached number two on the Billboard charts.

There will never be anyone who will replace Johnny Cash and Waylon Jennings, but we know they’d be really proud of this tribute performance. Watch for yourself below. You’ll be glad you did.