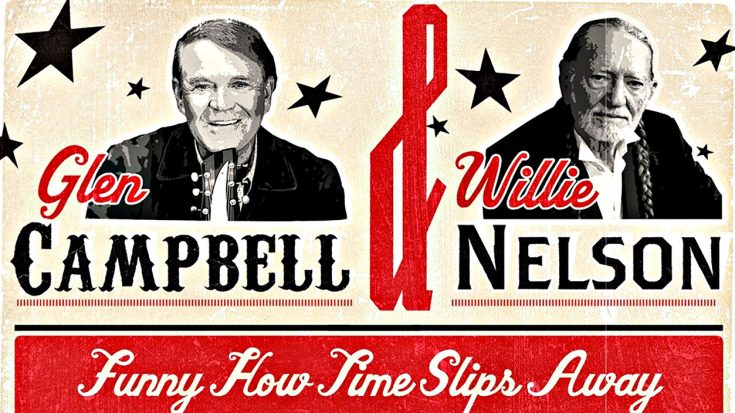 Country music legends Willie Nelson and Glen Campbell took to the recording studio to produce a chilling final duet that has left fans emotionally beside themselves.

Singing Nelson’s own heartbreaking ballad from 1961, “Funny How Time Slips Away,” the two teamed up for this recreated duet featured on Campbell’s final record, Adios. The singer used his final album to record the melodies near and dear to his heart that his career had not yet called for – and the results earned him his first posthumous CMA Award.

Campbell’s compilation with Nelson stole fans’ hearts with their impressive vocals and masterful harmonies. This decades-old classic speaks a powerful message of old friends that tragically parted ways, and just now realized how much time had passed. “It’s been so long now, / But it seems now, that it was only yesterday / Gee, ain’t it funny, how time slips away.”

Both Nelson and Campbell’s soaring vocals brought a flawless blend of two contrasting sounds as they sang about similar emotions and heartache.

Campbell’s longtime friend Carl Jackson spoke with Rolling Stone Country about the singer’s difficulty recording the song following his Alzheimer’s diagnosis. “Sometimes we had to do a line at a time because with Alzheimer’s, his memory of the lyrics, as we saw in the tour he had to use teleprompters, that went away pretty quick. But his melodies did not go away for a long time after his ability to remember actual songs… I can’t explain it,” he admitted.

Nelson released his solo version of the single in 1961, generating mass success and drafting a tune that would be covered by fellow artists for the duration of his career – and now, during the 2017 CMA Awards, this recreated classic has come to the forefront of the industry after taking home the win for Musical Event of the Year.

Listen to this heartbreaking final duet from Glen Campbell and Willie Nelson in the video below.