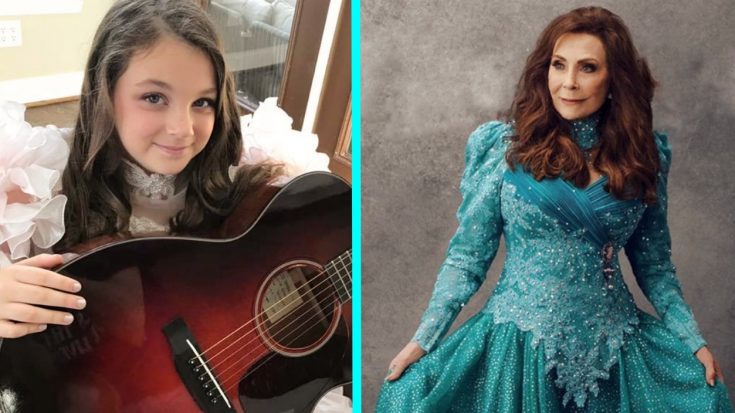 As fashion has changed through the decades, the clothes worn by country stars have changed as well. These days, it’s more of a rarity to find someone wearing a Nudie suit, and is much more likely you’ll encounter an artist wearing a t-shirt and jeans.

But despite these dramatic shifts in fashion, there’s one country legend whose style has always remained the same…Loretta Lynn.

#MusicMonday did you know that Loretta Lynn has been nominated 18 times for a @RecordingAcad #Grammy, at least once in every decade since the 1960s? Check out Loretta's Grammy Timeline at https://t.co/a4ccQS0Yq0 pic.twitter.com/sKfvmQof1x

When Lynn was first starting out, she didn’t have the money to make or buy over-the-top costumes for when she performed on stage. So her earlier getups had more simplistic silhouettes, plain fabric, and a bit of a Western stlye for a little added flair.

Just look at this video of Lynn performing on The Porter Wagoner Show early on in her career to see what we mean.

How Loretta’s Signature Style Came To Be

But as Lynn’s popularity exploded, she was finally able to pour a little more money into her wardrobe. That’s when her famous, fancy dresses finally made an appearance.

Tim Cobb, the designer behind some of Loretta’s iconic gowns, told PBS American Masters that she first was inspired to start wearing them after seeing her dear friend, Patsy Cline, wear similar dresses. Following Cline’s lead, Lynn decided to adopt a similar style and make it her own.

Nowadays, when people think of Lynn’s typical style, they picture her in an elaborate, brightly colored gown, likely covered in lace and sparkle. It’s a style that she wore decades ago, and it’s a style that she continues to sport almost every time she goes on stage.

So when a school in Cookeville, Tennessee celebrated a special “Tennessee Day,” one student captured Lynn’s signature style to dress up like the iconic singer.

The little girl, named Opal, donned an elaborate blush-colored ballgown with a hight neck and a ruffled skirt and sleeves. The dress featured beaded details across the chest, just like many of Lynn’s famous ensembles.

To complete her look, Opal styled her hair in long, Lynn-like waves and toted around a guitar. Her pictures happened to catch the attention of Lynn herself, who shared them with her followers on social media.

The country legend made it clear she loved Opal’s costume, writing, “Y’all how cute is Opal!!!“

We think Opal looks as cute as can be! And she certainly picked the perfect person to dress up as for her school’s “Tennessee Day!”

Have you ever dressed up like Lynn for Halloween or any other occasion? If so, we’d love to see the costume you put together!