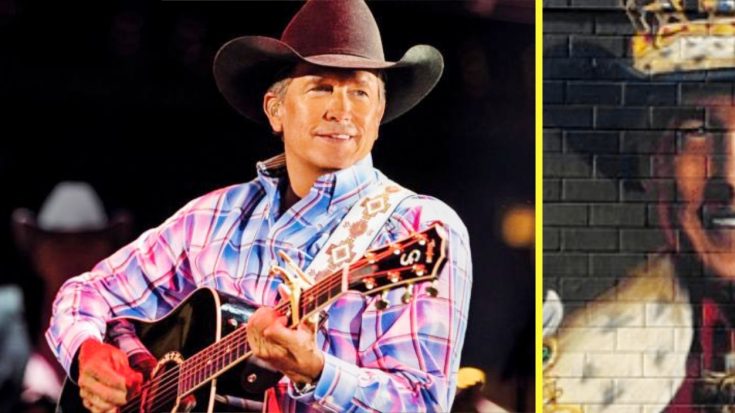 The King is Back, baby! And now, he’s bigger than ever! (But, they say everything is bigger in Texas.)

George Strait himself already is known for being a “king-sized” leader in country music and has amassed an incredible amount of No. 1 hits and chart-topping albums in his more than 40 years on the charts.

I'm pretty excited that 'Honky Tonk Time Machine' is out now. You can buy it or stream it at the link in the bio. Hope you like it! . . #HonkyTonkTimeMachine #GodAndCountryMusic #NewMusicFriday #GeorgeStrait #KingGeorge #CountryMusic #ClassicCountry #NewMusic #? #EveryLittleHonkyTonkBar

True to that form, he recently dropped his first album in several years, Honky Tonk Time Machine, and has already had people raving about the songs all across social media. The album was truly a family affair, with songs co-written by his son Bubba, and one song featured his grandson Harvey on vocals.

In his home state of Texas, George Strait is much more than an icon – he’s a hero! Truly, Texas loves George so much that they’ve gone and done something that nobody has ever seen before – all to honor the man known worldwide as “The King” of Country Music.

Reported by News 4 San Antonio, a wild new art project popped up on a brick wall along the St. Mary’s Strip in San Antonio recently thanks to a local artist.

The painter, Matt Tumlinson, took a literal meaning to George Strait’s nickname and depicted him in the way nobody else had ever done.

“Had an awesome time painting on the home turf!” he wrote on Instagram. “Here’s South Texas native and country legend ‘King George’.”

The mural was painted as part of a local event by the San Antonio Street Art Initiative and hopefully helps achieve their goal of “establishing a city where street art is abundant and accessible for all residents and visitors to enjoy.”

With the rising popularity of this mural on social media, we think that there will be a lot more visitors to come and enjoy “King George” than they expected!

Had an awesome time painting on the home turf! Here’s south Texas native and country legend “King George”- N. St. Mary’s, San Antonio Texas 2019. Great group of people doing great thing in this one of a kind city. I’m so happy to be apart of @sanantoniostreetart! Big thanks to @gravelmouthgallery for putting together an awesome event #sanantonioart #realcountrymusic #texasart #matttumlinson #kinggeorge. @georgestrait @spratx

Check out this “king size” addition of the King of Country himself his majesty @georgestrait done by artist @matt_tumlinson. Word on the street is that Mr. Straight drove by to take a look at it himself. Come on back Your majesty, we need a picture of you and the artist! #sanantoniostreetart #muralsandmusicatmidtown #2amsatx #sasai #sanantonio #stmarysstrip #sanantonioartist #largestoutdoorgalleryintexas