For The First Time Ever…Dolly Parton Hits The NASCAR Track 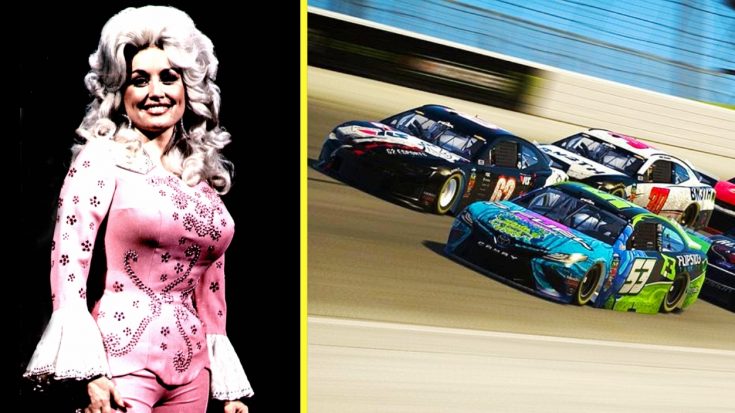 What a sight to see – and it’s all happening this weekend at the world-famous Bristol Motor Speedway in Tennessee!

For the April 6th Alsco 300, NASCAR’s beloved speedway will be graced with the famous face of one of country music’s incredible living legends – Dolly Parton!

Parton, who was born in Sevierville, Tennesee and has played an incredible role in the local economy with her main-attraction theme park in Pigeon Forge will be making her very first appearance on the NASCAR track – in a way that’s probably different than you’d think!

Everything to know about Dolly Parton's 33rd season of Dollywood https://t.co/QWRkxTtf2v pic.twitter.com/HhY8AxoBmw

The 73-year-old country singer and movie star might not be getting behind the wheel of a car this weekend, but she will be runnin’ hot for every single lap!

The starring part of Tyler Riddick’s No. 2 Chevy Camaro, Dolly Parton, and her Dollywood brand will be riding along with Riddick in this butterfly-pink and white ride featuring a giant portrait of her on the hood!

Taking the paint scheme and giving it a makeover to feature Parton and her various business ventures in the Tennessee area is a move that nobody has done before – especially this big!

Any driver who dares pass — or, heaven forbid, spin — the Dolly Parton @RCRracing car is going straight to hell pic.twitter.com/WZ47ld56di

East Tennessee NASCAR fans will be stoked to see this one-of-a-kind car zipping around the track after the country icon inked a deal with the team for some well-deserved media exposure!

As his primary sponsor for the race, Dolly Parton’s sponsorship features her record company Dolly Records on the hood with a large portrait of herself,  and the rest of the car bears the logos of her other Pigeon Forge attractions – like Dollywood.

“It’s an honor to represent Dolly Parton and her variety of businesses on our No. 2 Chevrolet Camaro this weekend at Bristol Motor Speedway,” Riddick said to WATE 6 ABC. “Dolly is an icon and has had a lot of success in her career, which is something I admire while trying to build my own success in NASCAR. Hopefully, we can take Dolly and the No. 2 Camaro to Victory Lane this weekend in her home state of Tennessee. I think that would be really special for everyone who is a fan of hers.”

What a way to make a living. pic.twitter.com/9nfNWMSZhQ

In addition to the announcements on Twitter, a lot of funny folks decided to take a minute to make a coy joke relating Dolly Parton and the car – check a few of them out below and let us know what you think of this cool new sponsorship!

At Bristol it's all take and no giving

Is it top heavy?